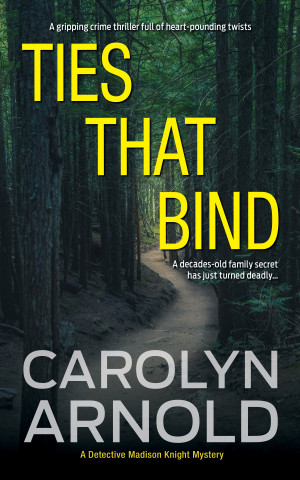 Rated 4.67/5 based on 6 reviews
In this gripping crime thriller, women are being murdered, and Detective Madison Knight investigates. Deadly family secrets come to light, but can Madison piece together all the clues before the killer strikes again? More
***Hélène Joy ("Durham County", "Murdoch Mysteries") to star as Detective Madison Knight in the series adaptation currently being developed by Muse Entertainment and Pop Fiction.***

She could feel him watching her… Though every time she turned to look, there was no one there. The rest of the world thought she was going crazy—until it was too late.

When Laura Saunders is found strangled in her home with a man’s necktie, Detective Madison Knight is assigned the case. Her sergeant at the Stiles Police Department wants her to conclude it was an isolated incident and move on with the investigation, but Madison’s not the type to cave under pressure. She’s haunted by certain unexplainable clues at the crime scene, including the presence of a mysterious photograph. Madison believes the picture may somehow tie into the murder, but before she can dig into it, another woman’s body is discovered in a local park. Heather Nguyen was also murdered with the same brand of necktie that had been used on Laura.

On the surface, there doesn’t seem to be anything beyond the way they were killed that connects the women. But as Madison delves into the lives of the victims, she unravels a web of deceit and betrayal and lays bare decades of deadly family secrets. Edging closer to the truth, Madison’s quite sure at least one more woman is slated to die. But can Madison piece together all the clues in time to save her?

“Arnold has written one of the best female cops that I’ve ever read… Madison is just one of those characters that will stay with you.” –Harlie’s Books, ⭐⭐⭐⭐⭐

“A good detective story with lots of twists and turns and an unexpected ending.” ⭐⭐⭐⭐⭐
“This is one heck of a mystery!” ⭐⭐⭐⭐⭐
“Brace yourself for the ending! I didn't see that one coming.” ⭐⭐⭐⭐⭐
“I loved Madison Knight and her sassy dialogue.” ⭐⭐⭐⭐⭐
“I found myself unable to stop reading this book.” ⭐⭐⭐⭐⭐
“A must-read for the mystery fan.” ⭐⭐⭐⭐⭐
“So many twists and turns I never saw the ending coming!” ⭐⭐⭐⭐⭐
“A solid police procedure mystery.” ⭐⭐⭐⭐⭐
“If you like true suspense, this is a book to read.” ⭐⭐⭐⭐⭐
“Like watching an award-winning police drama in my mind.” ⭐⭐⭐⭐⭐
“Intriguing, suspenseful, and full of surprises!” ⭐⭐⭐⭐⭐
“Well-written and researched on police procedures.” ⭐⭐⭐⭐⭐
“It was very difficult to set this book aside to do something else.” ⭐⭐⭐⭐⭐
“From the moment I began reading this book, I was hooked.” ⭐⭐⭐⭐⭐
Available ebook formats: epub mobi
Price: $0.99 USD
Buy Add to Library Give as a Gift
How gifting works
Create Widget
Tags: fiction mystery police procedural serial killer detective detective series detective mysteries female detective series mystery free books
About Carolyn Arnold

CAROLYN ARNOLD is an international bestselling and award-winning author, as well as a speaker, teacher, and inspirational mentor. She has several continuing fiction series and has many published books. Her genre diversity offers her readers everything from police procedurals, hard-boiled mysteries, and thrillers to action adventures. Her crime fiction series have been praised by those in law enforcement as being accurate and entertaining. This led to her adopting the trademark: POLICE PROCEDURALS RESPECTED BY LAW ENFORCEMENT™.

Carolyn was born in a small town and enjoys spending time outdoors, but she also loves the lights of a big city. Grounded by her roots and lifted by her dreams, her overactive imagination insists that she tell her stories. Her intention is to touch the hearts of millions with her books, to entertain, inspire, and empower.

She currently lives near London, Ontario, Canada with her husband and two beagles.

MURDER. INVESTIGATION. THE PURSUIT OF JUSTICE. Team up with hard-boiled detective Madison Knight and her partner as they follow the clues in search of justice for murder victims.

We're so confident you'll love this series, we're giving you the e-book version of TIES THAT BIND for FREE.

Reviews of Ties That Bind by Carolyn Arnold

This is a well written story with a nice twist at the end.


When a murder victim is found with a tie wrapped around her neck it's filed as an isolated incident. But when a second victim is found murdered with the same brand of tie Detective Madison Knight strongly suspects a serial killer is at work and anticipate more murders.
The relationship between Madison and her junior partner Terry added mostly good natured conflict. The two of them sparred constantly and provided an internal story besides the murders.
It didn't take many appearances by her Sergeant and the Police Chief to form the same low opinion of the men that Madison had developed. The characters are interesting and well defined. Madison is shown to be a single workaholic with a passive aggressive personality. She constantly thinks of what she coulda, shoulda, woulda done.
Editing is okay except for minor occasional issues, and the plot held my attention. I recommend this story.

On the negative side, there is far too much telling in narrative instead of using dialog to carry the story and inform the reader. In addition, the writing is wordy.
I cringed when Layton rented a car under a phony name he'd just made up. He couldn't have had a credit card in that name, and I know from experience I can't rent a car without one. That should have been researched and caught.

This review was unsolicited and free.
Vigilant Reader Book Reviews.

From the first page to the very last, you will be on your toes.

For someone not too familiar with the workings of a police homicide investigation, this story will give you a whole new perspective on what goes on in the real world. No easy answers, not always a direct lead, oftentimes our police officials must sift through numerous lies and misleading information in what many of us would not have the patience to tackle. Ties that Bind tells a story in a methodically paced tale that you will find hard to put down, turning page after page as you wait breathlessly for the next twist. It is realistic yet entertaining, an honest look at human nature and individuals from all walks of life. Nothing is as it seems...

Carolyn Arnold has written a nitty gritty story of a murderer’s revenge. Through the various twists and turns, you will never be able to figure out whodunit until the shocking end. I’ve always considered myself fairly good at picking out the villain, but I will tell you I was surprised at the ‘ties’ that led up to an arrest. Way to go, Carolyn!

A well-written piece with all-too-human characters, I was sucked in from the first page when Madison reached for her chocolate-fix. This was a nicely paced story that was not over the top or unrealistic; in fact, I loved every minute of it. It was entertaining without being too dark or depressing, and I can’t wait to read more, Carolyn. Keep them coming!

Enjoyed this page turner. Love mysteries and while trying to figure it out couldn't put the book down. Thanks.

In a Nutshell:
Dedicated Detective Madison Knight and her partner Terry Grant find themselves in the middle of a bizarre crime scene with a rare and expensive tie as the apparent murder weapon. The usual suspects are eliminated and another body appears with the same M.O. The race is on to try to stop a murderer before he becomes a serial killler.

First Thoughts:
It starts with a great introduction of characters and you immediately get a feel for how they will interact. I think a bit of a grab right off the start would have been helpful as the start is a little bit slow but thankfully well written so it's easy to go through.
I'm looking forward to seeing how Ms. Arnold gets the story really rolling and how her main characters past gets tied into the current events. Excellent writing Carolyn!

Thoughts Upon Completion:
There was a lot left unsaid that perhaps needed more explanation such as the case preceeding this one that was the cause of some of the underlying conflict. It felt a little too much like a second or third book in a series as opposed to a first. Procedurally what little I know of police work (which is little) was believable and interesting and the story kept moving at a nice pace which kept me wanting to read. I liked the character of Madison Knight although her relationship with Terry seemed a little bit forced at times and not as close as I would expect.

The epilogue was unnecessarily detailed and as I am assuming there are more books to come with this character didn't do much to get me excited for another Madison Knight Novel, luckily the rest of the book did make me willing to explore more of this character.

Overall:
It's not an edge of your seat thriller and it is flawed in a few ways (I'm sorry but the loss of a Grandparent does not compare to the death of someone you love who is close to your own age —sorry pet peeve—) however it is paced well and interesting enough that I certainly didn't feel I wasted my time in reading it. I would give another Carolyn Arnold/Madison Knight Novel a read.

Carolyn Arnold has a hit on her hands. Ties That Bind will tie you up in its twist and turns. I couldn't stop reading. With each page I found myself wanting see what was going to happen, how it would all turn out.

You have subscribed to alerts for Carolyn Arnold.

You have been added to Carolyn Arnold's favorite list.

You can also sign-up to receive email notifications whenever Carolyn Arnold releases a new book.