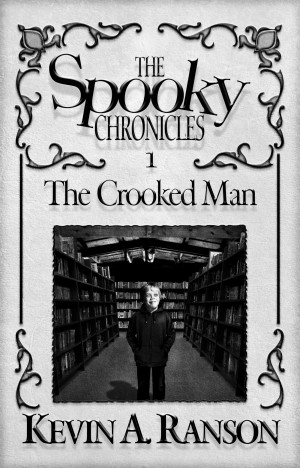 The Spooky Chronicles: The Crooked Man

The Spooky Chronicles is a book series about a child who comes back to life as a zombie but is still getting older. Having already overcome personal tragedy in his life, his unique condition makes him aware of (and draws him into) a secret, paranormal underworld he never asked to be a part of (but still thinks is pretty cool).
Available ebook formats: epub mobi pdf rtf lrf pdb txt html
First 30% Sample: epub mobi (Kindle) lrf more Online Reader
pdb
Price: $1.99 USD
Buy Add to Library Give as a Gift
How gifting works
Create Widget
Tags: horror mystery paranormal zombie spooky boy chronicles
About Kevin A. Ranson

Heeding a macabre calling listening to "Mother Ghost Nursery Rhymes" in kindergarten, Kevin started writing in grade school and filled up countless notebooks with story ideas while touring the Mediterranean in the US Navy. He is the author of The Spooky Chronicles and the vampire thriller series The Matriarch Vampires, creator/critic for MovieCrypt.com and "ghost writer" for horror host Grim D. Reaper, and has numerous credits in the role-playing game industry. His author blog is at ThinkingSkull.com.

Learn more about Kevin A. Ranson

The Spooky Chronicles: The Crooked Man
Meet Spooky, a dead little boy continuing to grow up. He goes to school, likes taking pictures in cemeteries, and doesn't breathe. Accidentally starting the zombie apocalypse is his biggest fear, but it's not his biggest problem.

Also in Series: The Spooky Chronicles

You have subscribed to alerts for Kevin A. Ranson.

You have been added to Kevin A. Ranson's favorite list.

You can also sign-up to receive email notifications whenever Kevin A. Ranson releases a new book.