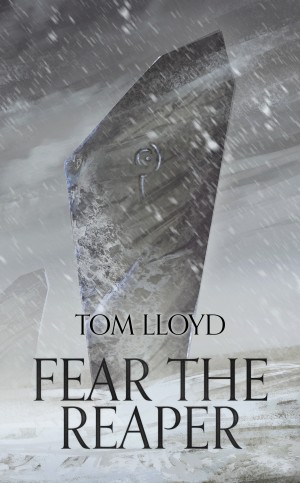 Tom Lloyd was born in 1979 and showed almost no interest in writing until the age of eighteen. I blame the teachers myself.

Nevertheless he did eventually find himself with a long summer to spare before university, and decided to start a novel when it was suggested he get a job to pass the time. This tells you much of what there is to know about him. The rest can be derived from the fact that he first had the idea of writing a book to annoy a schoolfriend by getting published before him.

No, honestly; he's actually that shallow.

It was swiftly apparent that this was not the quick route to fame and fortune that he’d hoped for. The first sign of this was the realisation that being good at writing was required, but he managed to surprise everyone by not giving up on something he didn’t show immediate promise in.

Studying Politics and International Relations at Southampton University had very little appreciable effect on him, beyond giving him a couple of ideas for future novels, but that was largely due to spending most of those three years in London shacked up with the god-daughter of an Asian dictator. Upon leaving university he decided – along with what seemed like half of all other graduates, some of whom had had the temerity to study English – that doing “book stuff” sounded like a fun alternative to working out what sort of job he wanted to do. There was also the intriguing suggestion of literary talent being passed on by some osmosis-like process. As a result of a little work experience at Simon and Schuster - combined with some shameless flirting with the HR manager - he got a job as an editorial assistant on the Scribner list, which allowed him to mistype letters to a whole host of talented writers.

Certain luminary examples there made it clear that before he became a fantasy editor he was going to have to spend several years iron-cladding his liver. Towards this goal, he decamped to the A M Heath Literary Agency by way of Random House, which was silly because walking down Longacre would have been a lot quicker, to work in foreign rights while also freelancing for writersservices.com and constantly revising what was slowly becoming The Stormcaller.

A three year litany of madcap adventures in the crazy world of agenting ensued, but it would be far too time-consuming to detail any of that so suffice to say that his hangover cleared sufficiently one morning in 2004 for him to realise that he wasn’t quite so bad at writing now. Maybe there was something to this osmosis thing after all - although if that’s true Katie Fforde and Dave Hill might get a surprise at the effect they’d had.

Securing the services of John Richard Parker at MBA Literary Agents proved a surprisingly painless experience – despite being previously rejected by one of John’s colleagues, which just goes to show how persistent one has to be – and soon he was sat in the office of Jo Fletcher at Gollancz trying to persuade her how much of a geek he was. After four years as contracts manager at Blake Friedmann Literary Agency he decided he didn't like other authors that much so he swapped his dark corner of Camden for one at Atlantic Books where it quickly became apparent that he prefers winning arguments to scruples.

Writing part-time, also known as watching loads more TV, he also manages to play a little sport in between trips to the pub and battering his next book - into a semblance of shape.

You have subscribed to alerts for Tom Lloyd.

You have been added to Tom Lloyd's favorite list.

You can also sign-up to receive email notifications whenever Tom Lloyd releases a new book.