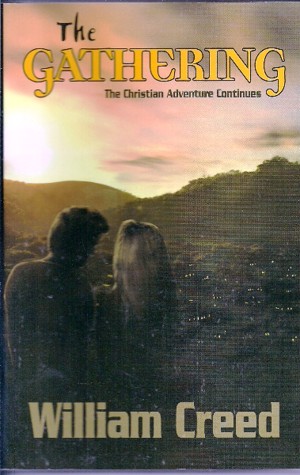 By William Creed
THE GATHERING is Book 2 of a Christian adventure series about the End Times. It follows the smash hit, COMES THE END novel. This is a three book series which is receiving rave reviews from critics and readers alike. More
Critics and readers alike gave rave reviews to the best-selling first book, COMES THE END. Now THE GATHERING, second book in the series, is here to again challenge and inspire readers. This action packed page-turner is a must for lovers of Christian fiction.

Andy Moore and his companion Stephanie plunge into a new and amazing adventure that tests their faith. This is a powerful story of awesome biblical miracles reappearing in the End Times with manifestations of God grace and power coming to the fore again.

God's powerful spirit is upon His own as they do battle with Evil forces arrayed against them in a desperate struggle for the souls of men and women. Critics are raving over the insightful viewpoints expressed in the book and the debates they are generating. Don't miss your opportunity to discover and weigh in with your own opinions.
Available ebook formats: epub mobi pdf rtf lrf pdb txt html
First 10% Sample: epub mobi (Kindle) lrf more Online Reader
pdb
Price: $2.99 USD
Buy Add to Library Give as a Gift
How gifting works
Create Widget
Tags: fiction drama adventure love story christian end times 666
About William Creed

ABOUT THE AUTHOR, WILLIAM CREED
By Sue Collier

William Creed was born in Detroit, Michigan. His family moved to Normal, Illinois when he was eight, then returned to Michigan five years later the small town of Romeo, Michigan, where his parents operated a children’s shoppe.

While a student at Romeo High, Bill started his literary career by approaching a local newspaper about writing a weekly column for teens. The editor liked the idea and he soon began writing a column entitled, “Viewing The Teens”. In one of his columns, Bill proposed the idea of forming a Teen United Nations as a way to encourage teenagers to put aside national politics and reach out to those in other countries. Bill’s journey into national politics brought him national media coverage, as well as many letters, including a letter from the Soviet Embassy in New York expressing interest in the idea.

After graduation from high school, Bill enlisted in the U.S. Air Force and was initially stationed at Tyndall AFB, Florida. In 1961, he was assigned to the Air Force Security Service and stationed in Darmstadt, Germany. Here he wrote a guide to living in Germany for the serviceman and his family titled, “G.I. In Germany.” The manuscript received endorsements from the Comander of European Forces, the Chancellor of Germany, and Mayors of Frankfurt, Berlin and Munich among others.

After discharge from the Air Force, Bill attended Wayne State University, but did not go into the writing field. Instead, he ended up in the entertainment industry. He spent the next twenty years producing and promoting concerts and other entertainment events for Encore, CRG, and Parthenon Productions. He produced these events throughout the eastern U.S. with such entertainers as Dottie West, Little Jimmy Dickens, Box Car Willie and many others who were popular at the time. Bill, a talented singer, also ventured into the performing side of the industry recording in Nashville his own songs in the mid-1980’s

Creed’s life changed dramatically when, at the age of 39, he contracted encephalitis from a mosquito bite he received in Florida. As a result of this bite, he lost the ability to count to ten, write, read or understand much of the English language. Though he was told that he would remain like this, Bill a long-time Christian, sought healing through his faith. Bill received a promise from God that he would be healed – and he was. Over the years, through prayer, and with the help of family and friends, he now has regained what he lost.

In 1998, Bill decided to return to the activity he enjoyed most, writing. Subsequently, he wrote COMES THE END which received rave reviews from critics and readers alike. He followed with his second book, “THE GATHERING”, which also has received an outstanding reception. Creed’s third book, THE PROMISE, was released in April 2009 to the delight of his many fans.

Bill lives in Romeo, Michigan with his wife, Sharon. Together they have five children and two spoiled dogs. His wife is a nurse manager in the Emergency Room at a local hospital and has been her husband’s chief supporter and fan. Bill spends a great deal of time traveling around the country doing book signings at book stores as well as military installations. His book has been taken overseas for distribution to servicemen in Iraq and Afghanistan by the Army.

Also in Series: Comes The End

Reviews of The Gathering: A Christian Novel Book Two by William Creed

You have subscribed to alerts for William Creed.

You have been added to William Creed's favorite list.

You can also sign-up to receive email notifications whenever William Creed releases a new book.