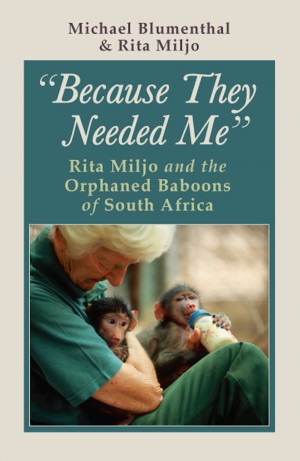 Because They Needed Me: Rita Miljo and the Orphaned Baboons of South Africa

By Micheal Blumenthal
In May of 2007, noted American poet and novelist and son of Holocaust refugees Michael Blumenthal went to South Africa to volunteer at C.A.R.E., a rehabilitation center for orphaned and injured baboons founded by Rita Miljo. Rita was a Lithuanian-born childhood member of the Hitler Youth who had gone on to have a life as adventure-filled as Beryl Markham’s in West With the Night. More
In 1980, a 50-year old animal-obsessed Lithuanian-born woman, and former member of the Hitler Youth, by the name of Rita Neumann-- later to become Rita Miljo-- spirited a battered young baboon by the name of Bobby from a national park in Angola. Therewith began a thirty-year odyssey that would bring her into conflict not only with many of her neighboring South Africans, who considered baboons to be "vermin," but also with the South African authorities themselves.
Much like the work of Jane Goodall with chimpanzees in Tanzania, Dian Fossey with gorillas in Rwanda, and Biruté Galdikas with the orangutans of Borneo -- but without a background as a scientific researcher -- Rita Miljo began her rehabilitation centre C.A.R.E. to nurse orphaned and injured baboons back to health, at the same time pioneering methods of reintroducing troops of convalesced baboons back into their natural habitat.
In May of 2007, Rita encountered a German-Jewish American poet and novelist, and the New Jersey-born son of Holocaust refugees, Michael Blumenthal, who had come to volunteer at the Foundation, and, with that, a rare and unusual friendship, which led to this unique and remarkable collaboration, was born. Combining thirty years' worth of Rita Miljo's edited journals -- which, for the first and only time in her life, she entrusted to another -- with Michael Blumenthal's own impassioned and insightful portrayal of Rita and her baboons, "Because They Needed Me" is a chronicle of primate conservation and the intrepid and courageous woman who devoted her life to it.
Available ebook formats: epub mobi pdf lrf pdb txt html
First 20% Sample: epub mobi (Kindle) lrf more Online Reader
pdb
Price: $8.99 USD
Buy Add to Library Give as a Gift
How gifting works
Create Widget
Tags: africa south africa primates animal rescue hitler youth care endangered species baboons animal culture miljo
About Micheal Blumenthal

Michael Blumenthal is the author of five collections of poetry, most recently The Wages of Goodness (1992), and the novel Weinstock Among the Dying, co-winner of Hadassah Magazine's 1994 Harold U. Ribelow Prize for Fiction. From 1992-1996, he was Senior Fulbright Lecturer in American Literature in Budapest, as well as an editor at the Central European University Press, and, from 1996 to 1997, taught at the University of Haifa in Israel. A former lawyer, Guggenheim Fellow and Director of Creative Writing at Harvard, he has been Distinguished Poet-in-Residence at the University of Louisville and Boise State University.

Reviews of Because They Needed Me: Rita Miljo and the Orphaned Baboons of South Africa by Micheal Blumenthal

You have subscribed to Smashwords Alerts new release notifications for Micheal Blumenthal.

You have been added to Micheal Blumenthal's favorite list.

You can also sign-up to receive email notifications whenever Micheal Blumenthal releases a new book.