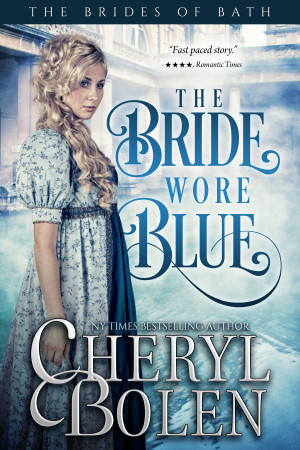 Rated 4.75/5 based on 4 reviews
Having made his fortune in India, Thomas Moreland returns to England in the hopes of winning Felicity Harrison, the fair beauty who saved him from death years earlier. But Felicity is determined to thwart the arrogant nabob, despite that he’s rescuing her family from financial ruin. Her fervent resolve, though, goes wickedly awry whenever she’s in his unsettling, seductive presence. More
Cheryl Bolen's writing draws you into her fast-paced story. 4 Stars – Romantic Times

Cheryl Bolen returns to the Regency England she knows so well. . .If you love a steamy Regency with a fast pace, be sure to pick up The Bride Wore Blue. – Happily Ever After

For six long years Thomas Moreland has dreamed of the beautiful young noblewoman who rescued him from death. While amassing his fortune in India, not a day passed he did not recall Felicity's fair loveliness, did not recall the silken tones of her sweet voice, did not desire to possess her.

Now a widow, Felicity Harrison does not recognize the handsome nabob as the young man left for dead by highwayman years earlier. Though she wants nothing more than to snub the arrogant man who promises to rescue her family from financial ruin in exchange for presenting his sister to Society, she cannot snub him. She must force herself to bear his company. But the longer she is with him, the more she has to force herself to remain true to her dead husband's memory. Why is it the humbly born Thomas Moreland possesses more nobility that any man of her class? And why is it she finds it harder and harder to mourn a dead man when Thomas's virility awakens her deepest desires?
Download: epub mobi (Kindle) pdf Online Reader
Price: Free! USD
Add to Library
Create Widget
Tags: romance historical historical romance regency regency romance regency england georgian romance historical england romance romance adult england historical
About Cheryl Bolen

Cheryl Bolen is the acclaimed author of more than a dozen Regency-set historical novels published by Harlequin Historical and Zebra. Her books have placed in several writing contests, including the Daphne du Maurier, and have been translated into 11 languages. She was named Notable New Author in 1999, and in 2006 she won the Holt Medallion for Best Historical Novel. A former journalist and English teacher who admits to a fascination with dead English women, Bolen is a contributor to The Regency Reader, The Quizzing Glass, and the Regency Plume. Her articles on Regency England can be found on her website, www.CherylBolen.com. 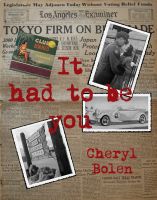 Review
MaxineMurphyAuthor reviewed on May 5, 2019

OPINION OF BOOK: This historical romance, set in Bath England was a delight to read. Felicity was a charming widow who was doing her best by her younger siblings since her father’s death. The characters are well written and engaging. They jumped off the page and were in no way the run of the mill blah blah blah. Although I have to admit the hero of the story was good at absolutely everything. He was so sweet he made my teeth hurt. It would have been nice if he had been a little more realistically flawed. The plot of the story weaves around in a delicate knot. I was never sure when one of the characters tugged on something which way things were going to go. I thoroughly enjoyed reading this book.

DO I RECOMMEND THIS BOOK: Yes I recommend this book

SPOILER SECTION (WHAT THE BOOK IS ABOUT): Felicity saves the life of a stranger on a road outside of London, when he had been robbed and left for dead. She was on her way to marry her beloved before he was shipped off to battle. Six years later, she has been widowed for four years and is still wearing her widow’s weeds. In the wake of her father’s death and gambling debts their family has been left on the poor end of the aristocratic spectrum. A newly rich gentleman, Thomas returned from India, approaches her with an offer to solve her family money problems. He will pay off the family debts, along with paying them a monthly allowance of sorts. In exchange he wants her to lend her family’s respectability to his sister’s coming out to find a good match for her. Felicity doesn’t know that Not only does Thomas not only credits Felicity with saving his life but has carried a torch for her since. He only saw her for moments that night before he passed out but never forgot her. Now he has returned to save her and to return life to her dark world. When she finds out who he is and how they know each other she believes he is only there out of sense of gratitude. So, Thomas must convince her he has loved her all along. Colonel Gordon, who has been trying to win Felicity’s favor before she married is in the background plotting. She doesn’t know the evil that he has already committed to be close to her or how far he will go to get her as his own. When Gordon and Felicity’s husband were fighting together, he killed her husband and shot himself in the leg. He was furious when Thomas showed up and slipped into Felicity’s life so easily where he had been unable to. He lies to her to get her into his carriage on a trip to go see a dying a friend who supposedly heard the dying words of her husband. When they stop for food, he drugs her and plans to rape her and have a priest marry them while she is still unconscious. Thomas and Felicity’s brother arrive in time to save her honor and Gordon dies. Happy ending is had.

*SPOILER ALERT*
This novel was definitely one that had me gripped from beginning to end. I was right there with Thomas and Felicity the whole time hoping that everything turned out alright in the end. I am very pleased to say that it did. Great story. :)

I enjoyed the book the couldn't like the main character, she really annoyed me

Great book! Beautiful story! Loved it!! Cant wait to start on the next one.

You have subscribed to alerts for Cheryl Bolen.

You have been added to Cheryl Bolen's favorite list.

You can also sign-up to receive email notifications whenever Cheryl Bolen releases a new book.