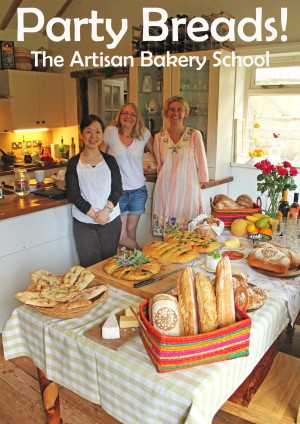 By The Artisan Bakery School
* FAB (Faster Artisan Bread) 3 Step easy method for making authentic artisan loaves with only 4 minutes hands-on effort
* Recipes include stuffed focaccia, pizzas & baguettes and breads for dips and mezze
* Fabulous last-minute recipes for show-piece breads
* Colour photographs and clear explanations
* Great tips on how to maximise the look, taste and texture of your party breads More
How to bake the wow factor into luscious breads your guests will love, whether you’re planning ahead, or your guests are on their way.

Few things are as sociable as sharing bread with friends; tearing into a juicy focaccia or a carving up a crusty baguette seems like a more vibrant celebration of life than just opening a bumper bag of crisps to offer with drinks. If you’ve made the bread yourself, it’s a fabulous feeling to watch the smiles on people’s faces as they munch. And roping your guests in to baking a quick pizza, baguette or a batch of lavash or fougasse is likely to make the whole evening unforgettable, not just the food!

Suitable for all levels, this book shows you:

Contains:
* Colour photographs and clear explanations
* Great tips on how to maximise the look, taste and texture of your party breads

Why not have a few friends round tonight?

Dragan Matijevic
“My fascination with breadmaking was born of necessity in the mid seventies, when I first arrived in this country. The bread in England then was, and still largely is, fast to produce and chemically induced. No wonder that today we have such a huge number of people suffering from bread allergies.
Coming from a macho culture, barely able to fry an egg, I was forced to learn how to bake a decent loaf, just to survive.
But my really passionate quest for the perfect loaf began later on in my life. Wanting to learn absolutely everything about what makes dough work, I picked up tips from master bakers everywhere, as well as trying one thousand and one ways of making bread.
The answer was to ditch everything but the essentials (good flour, clean water, salt and yeast) and give it all plenty of time.
Today, to make my perfect loaf, I prefer to use heritage flours (or gluten free flour), coupled with the time-honoured method of long fermentation, which makes delicious and beautiful breads that are also good for health.
I use mainly sourdough retardation method because it is dead easy (15 minutes hands on) and produces the best tasting loaves. My dough takes between 12 and 144 hours to develop and each loaf is carefully hand-crafted. That’s why I call my loaves ‘artisan’.
My greatest pleasure is when people come to us saying that they can eat bread again, because properly fermented dough is easy to digest. Or our students telling us that after the course with us they have never bought another loaf of bread again!”
Apart from baking Dragan does magic shows for all ages and writes books for children.

Penny Williams
Penny was fortunate enough to have a mother and two grandmothers who were all great cooks, and happy to have their kids in the kitchen. The teaching came almost by osmosis.
As a three-year old Penny remembers coming in from the garden to poke a curious, muddy finger into a mesmerising pillow of white dough rising in a bowl and squeaking with guilty alarm at the grubby dent she had made. To her astonishment, the dent disappeared, just as her laughing mother said it would. Penny’s lifelong passion for creating good food made it natural for her to bake bread, but it wasn’t until she met Dragan that she really developed those skills.
The Rise of Real Bread Conference in 2009 was her first encounter with the artisan bakers, millers, farmers, scientists, ecologists, writers and activists that are fighting for a better loaf on Britain’s tables. It was a watershed moment.
Penny says “We can only change the way people bake and think about bread one person at a time. But if we do it often enough, for long enough, we will contribute to positive change. That’s our reason for being.
But the most fun part of The Artisan Bakery School is running the weekend courses. It’s all about making people feel at home, preparing something special for them at every meal, gathering round the table, or round the fire, enjoying a glass of wine and telling stories after dinner. You wouldn’t believe how many amazing tales our bakers have to tell!”
Apart from being a baker Penny is a professional copywriter and an author of a number of fictional books, both for children and adults.

You have subscribed to alerts for The Artisan Bakery School.

Would you like to favorite The Artisan Bakery School?

You have been added to The Artisan Bakery School's favorite list.

You can also sign-up to receive email notifications whenever The Artisan Bakery School releases a new book.