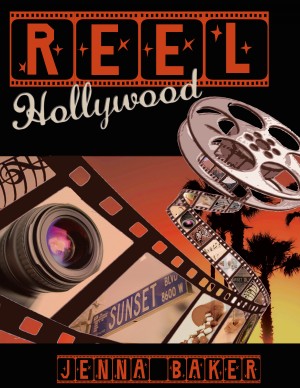 By Jenna Baker
Fictional producer Victoria Sharpe is back by popular demand in a hilarious new adventure filled with more tricks of the reality television trade. When a young starlit is found dead in her bathtub in the Hollywood Hills, Sharpe feels the pressure to deliver. As the story unfolds it reveals the shocking truth about the secret lives of those with wealth, celebrity and power. More
Reality television producer Victoria Sharpe is back on the case and this time she’s paired with a brand new team of detectives. Assigned to a new precinct, Sharpe finds herself working with Dennis “Hollywood” Johnson who seems more interested in updating his head-shot than his list of solved cases. His partner Terry joined the academy to toughen up, but she’s barely able to raise her voice to her co-workers, let alone a suspected killer! Meanwhile, things continue to heat up between Sharpe and Reid, the hunky detective that worked on her first case. But with two competing schedules, these two may never sync up.

When a young starlit is found dead in her bathtub in the Hollywood Hills, Sharpe feels the pressure to help the detectives solve this high profile case. As the story unfolds it reveals the shocking truth about the secret lives of those with wealth, celebrity and power. But will the team be able to crack the case before the media gets their hands on it?
Download: epub mobi (Kindle) pdf more Online Reader
lrf pdb txt
Price: Free! USD
Add to Library
Create Widget
Tags: comedy sexy chick lit funny bond reality tv evanovich detective comedy satire humor
About Jenna Baker

At the age of 23, after graduating with a Bachelor of Fine Arts degree in film and television from New York University, Jenna Baker picked up from New York and drove west to Los Angeles. It was the same summer that a television series called Survivor was premiering. Jenna caught an episode of the show in a hotel room and was instantly hooked. She was so smitten, that she changed her travel itinerary around to ensure she wouldn’t miss a single episode.

When she arrived in Los Angeles, Jenna landed an assistant job for a company called Rocket Science Laboratories. They were producing another ground-breaking reality television show called Temptation Island. Jenna stayed with Rocket Science for several years moving up from an executive assistant to an associate producer before moving on to other companies to further her career. Jenna worked on numerous reality shows including Surprise Wedding I & II, Married By America, Paradise Hotel and two seasons of The Swan.

Working on reality shows was a blast, but it was extremely difficult for Jenna as it meant completely giving up her own life in order to follow someone else’s. The hours were brutal and the competition was fierce, but mostly it was the mantra “anything to get the shot” that ultimately forced Jenna to choose a different career path. What she took away from her reality television career was a wealth of hilarious stories about doing anything and everything to make the show work. Reel Sharpe was the first book in the “Reel” series followed by Reel Hollywood. The novels allowed Baker the perfect outlet to share her stories and secrets from an insider’s perspective while still keeping the content light and entertaining.

Jenna now lives on Long Island with her husband Brandon and children, Austin and Avery.

About the Series: Reel Series

I wrote these books to take readers behind the scenes of reality television in a very playful way. The stories are tongue-in-cheek representations of my real-life reality TV experience with a lot of truth woven in. I created fictional characters experiencing real emotions in an environment that will make people laugh and gasp along the way. The stories are about Victoria Sharpe, a ruthless television producer documenting Los Angeles police officers as they try to solve crimes. With a tendency to bend the truth and a need to deliver against tough deadlines, Sharpe finds herself meddling in the investigations and nearly getting herself arrested in the process!

You have subscribed to alerts for Jenna Baker.

You have been added to Jenna Baker's favorite list.

You can also sign-up to receive email notifications whenever Jenna Baker releases a new book.