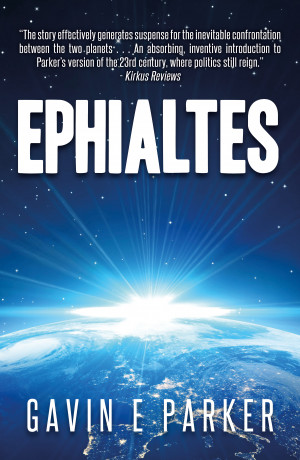 By Gavin E Parker
Rated 4.00/5 based on 3 reviews
When Earth's colonists on Mars vote for independence the enormous spacecraft Ephialtes is sent to pressure them into reconsidering. The Martians take some countermeasures of their own. Politics turns to brinkmanship. As each side seeks to avoid conflict they are both inexorably drawn toward it and, with Ephialtes closing in on Mars, time is running out. More
In 2241 the dominant superpower on Earth, the USAN, successfully concludes the fourth world war. The nation breathes a sigh of relief and looks forward to the resumption of elections.

Across the solar system the leading industrialist in the USAN’s small colony on Mars is thinking about independence. When the Martian population votes in favour Mars secedes from the union.

It seems to be a fait accompli until it’s suggested that a massive dropship carrying spacecraft, Ephialtes, built to patrol the Earth, could be refitted for interplanetary spaceflight. Maybe the USAN could use its military might to persuade the colonists to reconsider.

With an enormous instrument of war heading toward them the Martians resolve to defend their independence. Limited resources force them to rely on wit and ingenuity as they prepare their defences. Can they prevail against the mighty Ephialtes?

Gavin E Parker is from the Isle of Thanet in southern England, where he has lived and worked his whole life.

He has dabbled in creating music, film and video in the past and is currently writing novels, short stories and blogs.

Inspired by the rapidly expanding possibilities open to publishers in the twenty-first century, in 2014 Gavin set about writing his debut novel, Ephialtes. Ephialtes is the first of a trilogy of books chronicling the war between Earth and its former colony on Mars. A series of shorter pieces - the Ephialtes codices - set in the same fictional universe complements the main novel trilogy.

Having worked in healthcare, local government and education he has a mildly jaundiced view of the human condition, but still maintains good humour about it. Things could be worse, right?

About the Series: Ephialtes Trilogy

The Ephialtes Trilogy chronicles the twenty-third century war between Earth and Mars.

Review
Hannes Birnbacher reviewed on April 7, 2017
(no rating)
Review by: Hannes Birnbacher on Nov. 11, 2016 : (no rating) (Remove)
So there is a colony on mars longing to be free of earth ruling, and earth has a spaceship which is soooo big and mighty, and Mars has soldiers which are sooo bold and daring. How does the author deal with this age-old topic? An experienced and gifted author would work out the charakters in action and dialoge, in "Ephialtes" the reader fight's his way through long pages of mere descriptions about the acting persons, the good, the bad and the ugly.
But do not give up too early on the author - it is his first novel I see on smashwords, and he is getting better during the work.
First the very good news: there is a meaningful table of contents, no "Chapter 1, chapter 2, ... chapter 47" like in so much other Novels on Smashwords, and there are almost no errors or mistakes, wrong use of words etc. which are so irritating in many other Ebooks.
You will find the story will get exciting in some parts and there are scenes (like the secret agent who is hired when he just wanted to get boozed and make trouble in the bar, or the reporter trying every trick to get her interview) which make you smile if you want or not.
So stay at it. Ephialtes is the first work of the author I found on smashwords and he is improving during writing.
Personally, what is interesting for me is the "Science" part in "Science Fiction".
The SF part presents an uneven picture. The "Deuterium" mentioned in the first version of Part 1 is not what I know as Deuterium, probably a typo throughout the whole book. Maybe the Author had "Deutronium" from Star Wars in mind, or Neuterium, target of some scientific speculation in the 1930s ?
Another key part of the story is how the big carrier spaceships, built for Earth orbit, are enabled to reach mars within a few months. The author is somewhat vague about the atomic motors fitted to it, but remember (or google) the forgotten "project pluto", an atomic ramjet which was built and successfully tested (!) even in the 1950ties by the U.S., so that's realistic.
For me, SF is defined somehow like "projecting the influence of today's science on future social developments". Here at last, the author shows he is indeed mastering the genre, be it war lead by drones and Artificial Intelligences, be it the influence of streams on global networks to politics.
Finally, I was quite glad that I forced myself to read further on than the first 7% the previous reviewer managed to do. The novel improves "on the run". Characters still are somewhat pale but you can see that the author gets better to show their personalities, and the story gets more exciting as it develops. Hope I will be able to download the next part of the trilogy soon.

Remark: I never give ratings with stars in my reviews. "Ephialtes" still is, in my opinion and having re-read it and some short stories of the author, in the upper half of SF, maybe on the way to the best ten percent.

I read about 7% before putting this down. The story was not really doing anything for me, but was giving it time to get it's feet. Then we have man born on Mars who travels to Earth without difficulty. The Gravity of Mars is about 1/3 of Earth, it would be like tripling the weight your body had to support, then the man is a field soldier, with his Martian bones and muscles. As he gets back to Mars the confrontation with customs was just one to many stupid things in row.

An excellent book that now has me very eager to read more in this Universe. Ephialtes is set a few hundred years in the future and centers on the colony of Mars declaring their independence. While the people of Mars seem to be the protagonists, the characters are all very well developed and make it difficult to take sides. There also seems to be some interesting commentary on the approach that governments take about wars. I'm definitely eager to read the followup, due out some time in 2017!

From the beginning, this story was wove adventure, conflict into a sci-fi story that brought the wonder and adventure of building a new world to the reader. It found it interesting that when the colony on Mars voted for their freedom the USAN, originally the USA, refused to accept their decision. The USA fought for their own freedom in the same manner, but they didn't see it that way. The story allowed the reader to see the situation form both sides as the conflict heated up as the struggle escalated. The Martians wanted only their right to choose their own path while the leaders on Earth saw only the loss of revenue and power. The ingenuity of the people on Mars was a credit to their original home world even though the Earth leaders never saw it that way. When you add a perilous interstellar voyage with intricate relationships between many of the characters between and on both worlds, you have character who not only came to life, but held the reader spellbound as the story unfolded. The fight took a direction I never expected and held me spellbound until the very end. I will be waiting impatiently for the next book in the Ephialtes Trilogy.

You have subscribed to alerts for Gavin E Parker.

You have been added to Gavin E Parker's favorite list.

You can also sign-up to receive email notifications whenever Gavin E Parker releases a new book.