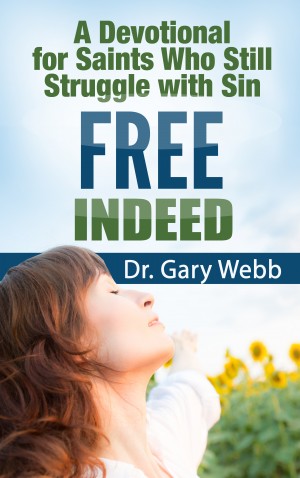 Free Indeed: A Devotional for Saints Who Still Struggle with Sin

Gary Webb grew up in East Tennessee, except for periods when his father moved the family while pursuing construction work. He never regularly attended church during his childhood or adolescence. While serving in the Navy near San Francisco, California from 1970-1972, he became addicted to various drugs. The Navy sent him for 90 days of in-patient rehabilitation before having him returned to active duty. Unfortunately, he soon relapsed into even worse drug abuse. Beginning in October 1972, he fell into a deep depression with active suicidal thoughts. Then, in December 1972, while reading the Bible, Gary placed his faith in Jesus Christ as his Lord and Savior. The changes in his life were instant and dramatic. Gary later served almost four years as a substance counselor at the Counseling and Assistance Center, Jacksonville, Florida, completing his enlistment in August 1976. Following discharge, he served as assistant pastor at Seaboard Avenue Baptist Church in Jacksonville. After completing additional education, he served as associate pastor of a church in Irving, Texas. His responsibilities there included a wide range of counseling duties and leadership of a small group ministry program. Gary was recalled to active duty in the Navy on two occasions, finally retiring in 1996. Since then, he has pastored four churches in Georgia and Alabama. Gary is a graduate of the University of the State of New York, Luther Rice Seminary, Baptist Bible College, and Andersonville Theological Seminary. He also has additional studies at Liberty Baptist Theological Seminary, and Dallas Baptist University. Following his retirement as pastor of Siberton Baptist Church in Attalla, Alabama, Gary has applied himself toward writing and providing author services such as editing, formatting, ghostwriting, and consulting. He can be contacted through his website at http://authorservices.mgwebb.net.

You have subscribed to alerts for Gary Webb.

You have been added to Gary Webb's favorite list.

You can also sign-up to receive email notifications whenever Gary Webb releases a new book.