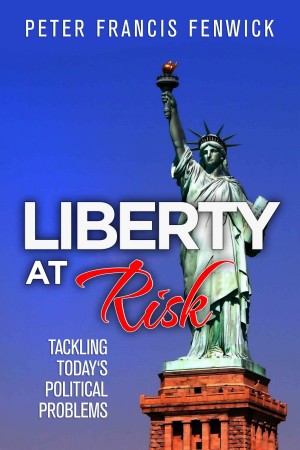 Testimonials
“Peter Fenwick challenges our perception of society’s status quo. He does not espouse a new age philosophy, but uses the philosophies of the 18th and 19th century libertarians whose thinking influenced our democracies in their infancy.
He questions the distortions of their ideals that are now causing rifts and failures in our modern day world.
While our current politicians, bureaucrats and business leaders maybe beyond change, these essays provide food for thought to stimulate the next generation to change our world for a better future.
Topics such as the role and responsibilities of government, the distortion of crony capitalism, the rights of lobby groups to peddle self-interest, tolerance, entrepreneurs, caliphates, the role of the family, accepting responsibility……the list goes on. But in itself it provides a curriculum for any University, year 11 or year 12 current affairs or philosophy program that all of us would love to join.”

"Never has a book been more timely and welcomed than Liberty at Risk: Tackling Today’s Political Problems. Australian Peter Fenwick addresses some of the most important and vexing problems of today in 23 short chapters. The answers rest on the foundations of Classical Liberalism and Austrian free market economics and the reader will be reminded of work of the great Henry Hazlitt. An excellent introduction for the uninitiated."

I was born in Geelong, Australia and educated at The Geelong College. I studied Civil Engineering at the Gordon Institute of Technology in Geelong, and Melbourne University, graduating in 1966. In 1972 I completed an MBA with distinction at Melbourne University.
From 1976 to 2011 I ran a successful consulting business, Fenwick Software, which implements commercial systems for business in the manufacturing, distribution, and waste management recycling industries. I have established an employee shareholder scheme and five of my long-term staff now own seventy–five percent, and manage the business. I remain a director of the company.
At Melbourne University, I studied philosophy under the charismatic Father Eric Darcy. I am an alumni of the Cranlana colloquium, a facilitated program, inspired by the Aspen Institute in the USA, designed to promote open and informed, non-partisan dialogue on the philosophical, ethical and social issues central to creating a just, prosperous and sustainable society. My philosophies were given practical expression in the culture and practices of my consulting business.
I have been married to Jill, a school teacher and author, since 1966. We have three sons and three grandchildren. We live in East Melbourne, Australia.

You have subscribed to alerts for Peter Francis Fenwick.

You have been added to Peter Francis Fenwick's favorite list.

You can also sign-up to receive email notifications whenever Peter Francis Fenwick releases a new book.