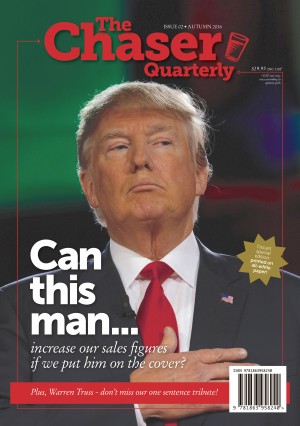 By The Chaser
From the team behind The Chaser's War on Everything, the Chaser Quarterly is a journal of bold ideas and even bolder fonts. Featuring original writing from some of Australia's most underpaid satirists, The Chaser Quarterly is everything you want it to be and nothing you don't. More
In this urgent second issue of "Australia's Most Self-important Quarterly", we travel the world on The Chaser's expense account to find the best places to visit before they're destroyed by the relentless pursuit of economic growth at all costs. Includes special tips on how to get great Instagram photos of places that are about to be despoiled, and how to get the locals to look hauntingly miserable for your holiday snaps to show to your friends.

Plus, we feature Sean Penn's second-ever foray into journalism (and hopefully his last) as he exclusively visits reclusive Syrian President Bashar al-Assad, on the pretext of making a movie about him. And if that isn't enough, this issue features a special pull-out* section of The Chaser's Dictionary of Biography, featuring in-depth write-ups of Australia's former Prime Ministers.

Also in this issue:
- In-depth, one-sentence reports on all the major world events
- ChaserLeaks of Peter Dutton's emails
- A look back at how in hell Canberra was founded
- A special photo essay from a Donald Trump rally
- A gratuitous and legally unwise swipe at Chevron's approach to tax
- We learn the hard way that clickbait doesn't work in eBooks, and
- Willie Nelson spills the beans on how he broke Twitter by smoking all of the hashtags.

The Chaser Quarterly 2: It's Everything You Want it to Be, and Nothing You Don't

*Note: it is pull-out in this eBook edition only if you're prepared to tear the screen from its plastic casing

The Chaser is a multilevel satire company that recruits members via a promise of cheap laughs in return for enrolling others into the scheme, rather than supplying actual sustained comedic entertainment. As recruiting multiplies, keeping up the cheap laughter becomes quickly impossible, and most members are unable to find any humour whatsoever in its content; as such, The Chaser is unsustainable and has often been described as illegally unfunny.

Schemes like The Chaser have existed for at least a century in different guises. Some multilevel satire schemes have been classified as neurotoxic.

Learn more about The Chaser

You have subscribed to alerts for The Chaser.

You have been added to The Chaser's favorite list.

You can also sign-up to receive email notifications whenever The Chaser releases a new book.