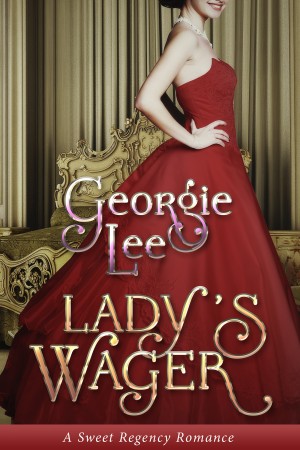 Edward has come to London to find a wife. Made leery of marriage by his father’s disastrous second marriage, Edward feigns poverty in order to find a woman who loves him and not his wealth. He loses his heart to the independent and spirited Charlotte, but her fear of being betrayed, and his hesitation to make a matrimonial mistake, prove difficult to overcome.

All seems hopeless until Edward challenges Charlotte to a wager. If he wins, he gains her hand in marriage. If he loses, then Charlotte is free of him. Charlotte accepts the wager only to lose her hand and her heart to Edward. Now Charlotte must put aside her fears of being betrayed by love long enough to let Edward into her life and admit he is the man of her dreams.

Award winning author Georgie Lee was born and raised in San Diego where she also attended college, majoring in television and film production. She began her professional writing career at a local cable TV station writing marketing videos, promotional spots and public service announcements, some of which still haunt the airwaves.

Blinded by the dazzling lights of Hollywood, she headed north to Los Angeles where she earned her MA in Screenwriting, and settled into a career in the interesting but strange world of the entertainment industry.

A lifelong history buff, Georgie hasn’t given up hope that she will one day inherit a title and a manor house. Until then, she fulfills her dreams of lords, ladies and a season in London through her stories. When not writing, she can be found reading non-fiction history or watching any movie with a costume and an accent.

You have subscribed to alerts for Georgie Lee.

You have been added to Georgie Lee's favorite list.

You can also sign-up to receive email notifications whenever Georgie Lee releases a new book.