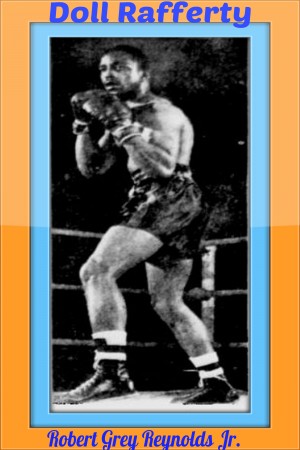 By Robert Grey Reynolds, Jr
Originally from Chicago Doll Rafferty came to prominence in Milwaukee as a pupil of former fight great Joe Gans. He was also trained by former lightweight champion Pinkey Williams. Doll's best punch was a right and he ascended the lightweight ladder for a time, before peaking around 1947. My book looks at his fights, family, untimely death and contains a detailed list of his opponents & fights. More
Doll Raffert like Juste Fontaine was a lightweight boxer from Milwaukee. Both entered the ring around 1943 and each enjoyed a measure of success in their careers. Doll and Juste fought three times with Rafferty winning two of the fights and Fontaine winning the bout fought in Pittsburgh. Both Rafferty and Fontaine fought lightweight champion Ike Williams and lost. Though a non title bout Williams' loss was pivotal in his career, as was Fontaine's loss to the champion. Fought in Philadelphia on September 29, 1947 Doll went toe to toe with Williams before he succumbed completely near the two minute mark of round four.