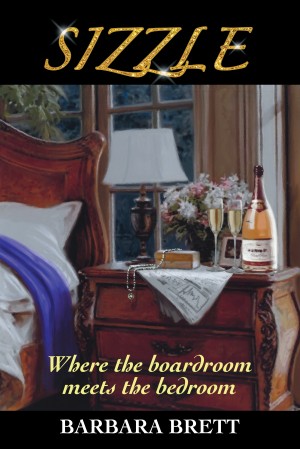 Sizzle: Where the Boardroom Meets the Bedroom

It’s the glitzy 1980s. Fortunes are being made and lost—and made again. Wall Street is on a roll. One after another, corporations are being gobbled up by rapacious raiders. And now SIZZLE, the most glamorous and profitable magazine in the world is up for grabs. British media mogul and corporate raider Harrison Kendricks has set his sights on this publishing plum, in which the reputations of the rich, the famous, and the beautiful can be built or destroyed with a paragraph or a photograph. He has never before lost a hostile takeover. But then he has never before been in competition with Marietta Wylford, the brilliant and beautiful CEO of Wylford Enterprises. She needs only SIZZLE to crown the business empire she has built with nothing but her own genius and ambition, and she is determined to let no one stand in her way. Not even the mysterious and dangerous Harrison Kendricks.

Marietta Wylford was not always at the top of New York’s business and social worlds. Born into poverty, she was only sixteen when her browbeaten mother died of overwork, and her brutal, alcoholic father abandoned her. But if fate had thrust her into such desperate circumstances, it had also given her the means to escape them: a brilliant mind, a beautiful face, and a figure most women would die for. She used them all to blaze her way to the top. One by one, she had always been able to foil those who dared try to topple her from her pinnacle.

But Harrison Kendricks is different. They are two of a kind. Creatures who have fashioned themselves in the image of their own wants and needs. Neither has ever lost a battle in the boardroom—or the bedroom. To defeat him, she will have to uncover the one vile secret that will utterly destroy him. And she will do anything to get it—even at the risk of breaking her own heart.

Barbara Brett’s lively and colorful publishing career includes stints as a proofreader for Esquire magazine and as the meat-and-poultry editor of a trade magazine. For several years she was the editor of, consecutively, True Romance and True Confessions magazines, the nation’s leading confession publications. During this time, she began writing mainstream novels, and after the publication of two of them, she was named vice president and publisher of Thomas Bouregy & Company, where she oversaw Avalon Books, the company’s hardcover fiction line for libraries, and Airmont Classics, its softcover reprints of the classics. Many of the writers she worked with over the years have gone on to great success and even bestsellerdom. In 1993, Barbara left Bouregy to establish her own publishing company, Brett Books, devoted to hardcover inspirational nonfiction. The first book she published was the international bestseller Where Angels Walk by Joan Wester Anderson, which was on The New York Times bestseller list for over a year and has sold over two million copies. She has been interviewed in the media and has lectured on writing and publishing around the country.

Barbara is the author of Between Two Eternities and Love After Hours, originally published by Avon Books, and Sizzle, originally published by Zebra. With her husband, Hy, she wrote the critically acclaimed mystery novel Promises to Keep, originally published by Harper & Row, and a Mystery Guild main selection. Time constraints forced her to give up her writing after first joining Bouregy and later running her own company. No longer willing to make that sacrifice, she has now closed her company to return to what has always been her first love—writing. First on her agenda, however, is joining the e-book revolution with the publication of her earlier novels here on Smashwords.

Reviews of Sizzle: Where the Boardroom Meets the Bedroom by Barbara Brett

You have subscribed to alerts for Barbara Brett.

You have been added to Barbara Brett's favorite list.

You can also sign-up to receive email notifications whenever Barbara Brett releases a new book.