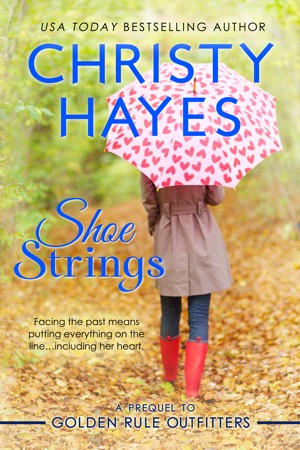 Jesse has spent years rebuilding his relationship with his teenaged son and ex-wife after running out on them eleven years ago. But his dad’s not so quick to forgive and forget. The water under the bridge becomes mighty choppy when beautiful Angelita walks into their lives.

Jesse’s ex, Kerri Ann, is a far cry from where she thought she’d be in life. Even before she got pregnant with Ty, things between her and Jesse had faltered, and there was only one person to blame: Bryce Jenson. Kerri Ann never expected her long-ago crush to settle back into Sequoyah Falls to practice law. Hell, no one did.

Bryce had his reasons for returning home and Kerri Ann was at the very top. They seem destined to remain just friends, until Angelita comes to town and stirs everything up.

As Angelita and Jesse embark on a relationship, her father’s demands become threats and she’s forced back to Atlanta. Jesse’s attempt to save her uncovers more of her past than he bargained for. Will Angelita’s prince charming come to her rescue or does Jesse’s love come with Shoe Strings attached?

Christy Hayes writes romance and women's fiction. She lives outside Atlanta, Georgia, with her husband, two children, and two dogs.

Christy Hayes' "Shoe Strings" is about Angelita Barros, a shoe designer with her own up and coming boutique in Atlanta. Shes about to head off for a tropical vacation when she sees her estranged father lurking about. Instead of the planned trip she ends up hiding out in a small mountain town in North Carolina.

While friendships develop her father continues to hound her about a business deal Things do not seem to be quite on the up and up and demands become threats. She must discover the truth behind it and also where her relationship is heading.

This is a great chic lit type of story. I liked Angelita's character very much. She had a take charge personality but with a softer, vulnerable side. Jesse's character was also done well. He initially comes off as a ladies man but then acquires more depth.

I did think the character of Kerri Ann was a little weak. It's hard to imagine that someone once so popular would be so insecure and blind to her friend's feelings. That's just my opinion though.

Definitely give it a read.

Have you ever read a book blurb and thought "this could be cute" and then read it to find yourself even more pleasantly surprised? That's what happened when I read this book. It cute and sweet, with adorable characters that make you want to find Sequoyah Falls, NC and move on in.

Angelita Barros finds herself ditching her planned Florida vacation after spying her estranged father in her high end shoe store talking to her partner. She does what any rational adult does and flees the area, making a spur of the moment reservation and a mountain cabin in North Carolina. When she makes it the the cabin, she find the area beautifully shielded in trees and wrapped by a river that would help her put things in perspective. What she didn't intend to find was a half naked man coming out of her rented cabin's bathroom.

Jesse Bloodworth has spent the past three years righting the wrongs he'd done in the past. He was good friends with his ex-wife and he and his son had a solid relationship. He had a thriving business and a home he loved. He thought he had everything he'd ever wanted. But when he stepped out of that bathroom and spotted the lovely Angelita, he knew he had one last piece to his picture perfect puzzle to add.

Jesse is damn adorable, in a rumpled shirts kind of way. He's so comfortable in his own skin that he has a way of making those around him feel the same way. Angelita was no exception. When she felt like her life was falling apart, she'd spend five minutes with Jesse and feel better. Sure, he infuriated the hell out of her, but she could resist his pull. And he couldn't resist hers.

Jesse has been perfectly happy with the way things were in his life. But the minute he met Angelita, she changed his perspective on everything. He acted as if her choices of color and shoes annoyed him, but those were all things that drew him in. Despite her best effort to keep Jesse at arms length, he pushed to get what he wanted. In the end, it was that "I don't take no as an answer" attitude that helped him get what he wanted.

The secondary romance of Bryce and Kerri Ann was sweet. Who doesn't want to think that they could end up with that childhood sweetheart they've always loved.

I'm not usually a sugary person, but this truly was a sweet, enjoyable book. It's the perfect thing to read when you want something you know if going to make you feel so much better at the end.

Wow! Let me first say I have been in a kind of reading funk.. I think its in big part to me not being home, but nothing was grabbing my attention. I picked up this book, and it blew me away. It captured me from the beginning and didn't let me go until I finished. Every time I set this book down i would think about the characters and what they were going through and wondering what was going to happen next until I just gave up. I told the dishes they would have to wait, I had to finish this book. Christy did a fabulous job with her writing style. Every scene is believable, she did an amazing job on detail. Every thing played out like a movie in my head.

I love the story. There is more than one story, more than one happily ever after, and it made me feel good inside. I know this is only a book but just thinking what these characters went through and how they end up.. you have to read this book.

You have subscribed to alerts for Christy Hayes.

You have been added to Christy Hayes's favorite list.

You can also sign-up to receive email notifications whenever Christy Hayes releases a new book.