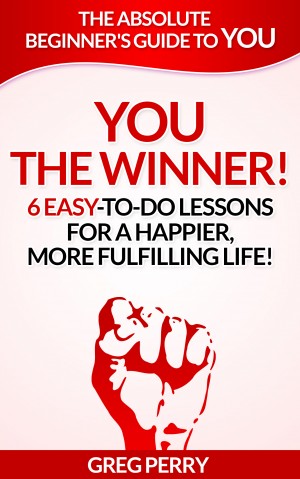 YOU: The Winner 6 Easy-To-Do Lessons for a Happier, More Fulfilling Life!

By Greg Perry
Ask yourself honestly, “Am I a winner?”

If you hesitated and had to think about it, then NO, you’re not a winner. But don’t worry, you’re going to get the “keys to the car” to drive yourself further than you thought possible… YOU: The Winner… yes, YOU! More
Ask yourself honestly, “Am I a winner?”

If you hesitated and had to think about it, then NO, you’re not a winner. But don’t worry, you’re going to get the “keys to the car” to drive yourself further than you thought possible… YOU: The Winner… yes, YOU!

In Greg Perry's latest bestselling book, YOU: The Winner, you’ll discover:
• The 4-step problem solving solution that successful CEO’s use all the time!
• How to complain so you don’t come across as a loser that people distance themselves from!
• Discover a simple analogy about being in the middle of the road that will bring instant clarity to your life!
• How to use peoples’ inherent laziness to your own benefit!
• Why having enemies is a good thing for you (this may be the most important lesson you learn from this book)!
• How weak people telegraph their weakness to strong people and what you must do immediately to correct this!
• If you don’t plan this 1 crucial thing with each goal that you have, you won’t ever achieve anything!
• Why hypocrites are the ultimate losers in life!
• A simple trick you can do if you’re wrong about something that will make you look great in the eyes of others!
• Learn about the characteristics of two categories of people (no, not winners and losers) in order to manipulate them (in a good way) and move yourself higher up!
• Ironically enough, the more powerful and popular you are, the smaller your true circle of friends are – Why this is and what to do about it for best results!
• Why being a private person and clinging to privacy is making it hard for you to be a winner (nothing to do with social media)!
• Your personal “remnant” and how to use it to propel you to being a better person with a better life!
• How to win “better” friends and influence people (this will teach you something very important about friendship and why the friendships of “today” aren’t that important)!
• What you must never do publicly if you want to look like and be a winner that other admire!
• When there is a problem you are facing, this is the only “script” you must follow and do!
• The two things you must do when face to face with people (do these two things and you’re instantly ahead of 90% of the people in the world)!
• Why taking a special type of class (doesn’t matter your age) will develop 4 critical skillsets you must have in order to be a winner!
• How winners use something called a “swap out”!
• What burnout says about you and your decision making and the one important thing burnout can do for you!
• Discover a life lesson on how to create winners based on what mother eagles do to their young!
• The one thing that you must do in order to minimize your stress and avoid stressing out (this technique will make or break you)!
• Learn this secret tactic the world’s best sharpshooters use to hit bulls-eyes and how you can use it to get a bulls-eye in life!
• How lawyers collect facts to assess the strengths and weaknesses of their client’s case… and how you can use their techniques to assess yourself and make your strengths stronger!
• If you can’t get a problem out of your mind, do this and you’re instantly on your way to solving the problem!
• And so much more!

You’re either a winner in this game of life or you’re not. You can’t fake it and even trying to fake it makes you a loser in your own subconscious mind. It doesn’t have to be that way. Use the 6 powerful lessons you read in YOU: The Winner and finally become a winner in life that others look up to and respect.

Greg Perry, is known as The Most Interesting Author in the World.

He is a Bestseller and The Merchant of Truth

In the 1990’s, he was the most prolific author of computer-related writing on earth, and more than 85 of his books were published (many still in print) by major publishers all over the world and translated into almost every language in the world. Those books published by traditional publishers are now counting up towards the 4 million books sold mark, having already surpassed 3 million in sales.

Since the 1990s, he began his own publishing company named MakeRight Publishing, Inc., and has since been publishing his own titles as well as others, specializing in diet and health-related titles but including far more than those as well. MakeRight Publishing, Inc., has had bestselling titles, many of which ghost-written by Greg Perry, on Amazon’s bestselling lists, often with two or more ranking above bestselling titles such as The 4-Hour Body just a few short months after Tim Ferriss’s release.

In other words, somebody certainly listens to him. A lot of somebodies. Maybe you should too.

Not only is Greg Perry the proved historic king of technology writing, he’s traveled the nation teaching international seminars such as the acclaimed FreedomFest.

In addition, here’s a small sample of his national media appearances:

* He commanded his own segment on C-Span, telling the nation eye-opening information they had never heard before, changing minds and hearts about the evils of unGodly government intrusion.

* He helped compose and then star in a Penn and Teller Showtime special episode in which he was featured as the “go-to man” for the topic’s expert opinion.

* John Stossel requested his presence in a special anniversary “Stossel” episode on the Fox News network. John Stossel, a Godless Libertarian (sorry to be redundant) was skilled at editing Perry’s words and arguments, sometimes to portray them as his own in the final, edited broadcast.

* In 5 years of co-writing, producing, and often co-hosting a nationally-syndicated television talk show in the 1990s, one that aired five nights a week, he was the only person trusted to fill in for the host when the host was out of town.

* Perry has been a featured writer and columnist for many websites including, Lew Rockwell, The Proper Villains, and World Net Daily.

* Greg Perry prefers to expose the lies of the so-called “right” over the left. After all, the left is expected to lie and be wrong most of the time. In this effort, he has attended Seminary, taught many times in-depth Bible studies, and is one of the most extraordinary writers about the Bible – one who can expose the fallacies of most lukewarm believers today. That is a primary passion of RightNerve.com. If you’re not a Christian, you will love seeing him attack the sad state of the church today.

* Greg Perry is a business maven. Although that’s not where his interests fall, he will provide tons of advice along the way for improving yourself and your income. After receiving an undergraduate in Computer Science, he received his MBA – Masters in Business Administration – with an emphasis in Corporate Finance.

* Greg Perry has traveled the nation taking weapons training classes at all the major academies in the nation (therefore, the earth), including the acclaimed Gunsite Academy, founded by Col. Jeff Cooper. Much of Perry’s books and other writings center around weapons and self-defense.

* Perry and his wife Jayne have traveled the globe, spending a total away time of several literal years outside the USA, learning about other cultures and seeing what works and what does not. A person who writes about right and wrong has little gravitas behind him if he is not well-traveled. From the bubbling hot springs and ice-capped mountains of New Zealand, to an exploration of the inside of Egypt’s largest tombs, to studying how the best coffee on earth is made in Venice, to getting sick in the smog-infested provinces of China (if you have enemies, tell them China is a great place to visit), to being kidnapped in Singapore (true story, but fortunately, not as bad of a true story as it sounds), Greg Perry has traveled the world and has years of experiences and personal growth and observations to share along the way.

The number of weak, uninteresting, soy-consuming, estrogen-laden males are growing in both real numbers as well as in the percentage of males. The real man is on his way out, often laying down his proper dominance to a feminist-run society.

Whether you’re a man or woman, you owe it to yourself to learn from such a world-traveled Man of Letters as Greg Perry is. To ignore such an individual is to ignore growth you would otherwise enjoy. 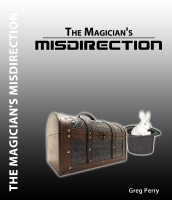 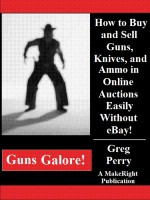 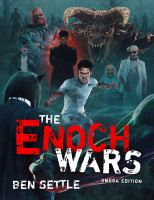 You have subscribed to alerts for Greg Perry.

You have been added to Greg Perry's favorite list.

You can also sign-up to receive email notifications whenever Greg Perry releases a new book.