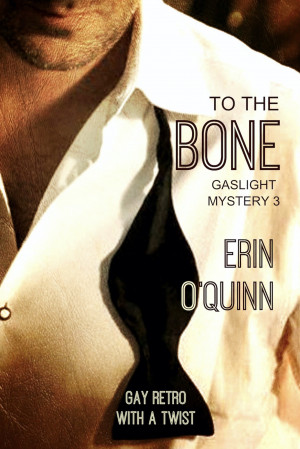 To the Bone (Gaslight Mystery 3)

Michael McCree has joined forces with sulky Simon Hart as a PI in 1923 Ireland. The men begin working with a nosy new agent who interferes with their most private affairs. Will they be able to track down an art thief, the head of a large criminal enterprise, and a murderer—while deepening their relationship—as long as Moshe is so close to the bone they may never shake him off? More
The time is 1923, and the place is a fantasy city in Ireland.

Private eyes Michael McCree and Simon Hart have a case to solve: to find more than a score of stolen paintings, and especially one small valuable work of art worth more than all the others. But the case grows more complex the deeper they look into it. Soon Michael and Simon find themselves searching not just for a thief, but for a city-wide ring of criminals. And the closer they get to the paintings, the closer they find themselves to a killer.

Into this mix steps a man named Moshe—a pesky, secretive, nosy man who is nevertheless a brilliant investigator himself. He gives both the men fits, burrowing like a tick into their very private affairs, so close they have a hard time evading him.

Can the investigators solve a series of crimes and take care of the interfering Moshe, while driving their own intense relationship all the way to the bone?

Erin O’Quinn sprang from the high desert hills of Nevada, from a tiny town which no longer exists. A truant officer dragged her kicking and screaming to grade school, too late to attend kindergarten; and since that time her best education has come from the ground she’s walked and the people she's met.

Erin has her own publishing venue, New Dawn Press. Her works cover the genres of M/M and M/F romance and also historical fantasy for all ages.

You have subscribed to alerts for Erin O&#039;Quinn.

You have been added to Erin O&#039;Quinn's favorite list.

You can also sign-up to receive email notifications whenever Erin O&#039;Quinn releases a new book.