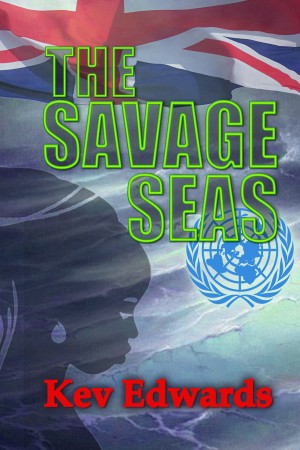 By Kev Edwards
The International Marine Police fight a gangster turned human trafficker who kidnaps villagers from remote Somali areas and ships them to Peru where a local gang leader sells them on. Each shipload brings a life of enforced misery to the kidnapped villagers. But, as the story unfolds the IMP learn that some captives are to be sold to terrorists intent on slaughtering thousands of US citizens. More
This thriller, set in 2014, follows the International Marine Police, a United Nations Agency, in its fight against human trafficking, otherwise known as 21st Century slavery. The IMP is the brainchild of former English Merchant Navy Commodore William Smart, and has already had much success in combating modern day piracy at sea.
The Commodore has learnt that Gabriel Obi, an African gang leader, snatches women and children from Somali villages and transports them on his own ship to a small port in Peru. Here, Obi has teamed up with Raol Santos, a violent gang leader who will arrange the sale of the captives to the highest bidder. Amongst the captives on the first slave trip is Amal, an eight year old girl destined for a miserable life as a domestic servant or for an even worse life in America's underage sex trade. The ship's next voyage is imminent and the IMP plans to replace two of the ship's crew with their own men.
Meanwhile, on American soil the Security Services unearth a terrorist plot to carry out a series of deadly attacks, killing thousands of people on a scale never before seen in a Western country. The terrorists will supplement their men with kidnapped women and children to give the appearance of family groups enjoying normal day to day life. Can the IMP overcome the twin evils of terrorism and human trafficking?
This story sees the return of two key characters from The Killing Seas, both ex Merchant Navy Officers. The first is Ellie Bannerman, a Marine Engineer who was attacked in an attempted rape before she joined the IMP. She was supported through her ordeal by Commodore Smart and left active service to join his new force. In this novel Ellie leads the IMP's crack troopers in the attacks on the Peruvian end of the trafficking pipeline.
The other character is Ben Petersen, a former Merchant Navy Chief Officer whose wife was murdered in an unsuccessful hijacking by pirates off the Somalian coast. Ben, like Ellie, has difficulty in developing a personal life but is absolutely committed to the IMP and its fight against piracy. He will go back to sea as the Chief Officer of the ship carrying the captives.
They are joined once more by a crack team of US Navy SEALs led by Captain Jake Stanley, Pete Davey and Captain Jelly, a South American tugboat captain and IMP undercover agent. Once more the Commodore will rely heavily on his backroom staff, particularly his Chief of Staff Danny Daniels and his Head of Intelligence Ginger Rogers.
With the FBI and CIA becoming increasingly anxious, will the IMP succeed in bringing the misery of human trafficking to an end and remove the threat of a series of terrorist attacks on America's best known and most visited tourist venues?

Kev Edwards is a Cornishman born and raised with the sound of waves crashing against the shore below his bedroom window. From an early age he decided to join the British Merchant Navy as a navigator. Coming ashore some years later he joined the Civil Service and now works as a free-lance consultant. Kev lives in Nottinghamshire with his wife and has two adult daughters.

About the Series: International Marine Police

Formed by William Smart, an ex-British Merchant Navy Commodore, the IMP is an agency of the United Nations dedicated to fighting maritime crime across the world's oceans.

IMP operatives are usually former merchant navy sailors, or have worked with special forces, police and security services or the armed forces.

IMPs have already helped to reduce piracy off the east coast of Africa and around the Asian coastlines. They are actively involved in eradicating human trafficking and have helped individual countries fight the scourge of terrorism.

You have subscribed to alerts for Kev Edwards.

You have been added to Kev Edwards's favorite list.

You can also sign-up to receive email notifications whenever Kev Edwards releases a new book.