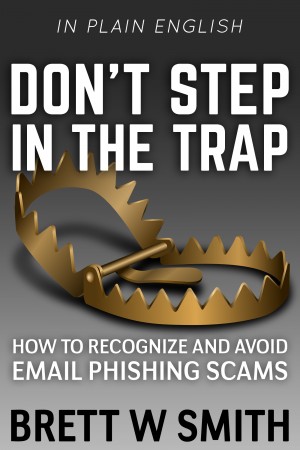 Don't Step in the Trap: How to Recognize and Avoid Email Phishing Scams

By Brett Smith
Rated 5.00/5 based on 1 reviews
More and more consumers and businesses are being victimized by increasingly sophisticated email scams, including "phishing" schemes. This handy, step-by-step guide, written in plain English, will show you how to recognize phishing emails. It will help you avoid being taken in by these scams, without having to decipher a lot of computer jargon. Includes quick reference guide and glossary.

Brett W. Smith is a native of Jacksonville, Florida. He studied math and government at the University of Texas at Austin, and political science, accounting, and German at Brigham Young University. After graduating from law school at BYU, he became an attorney, working both in private practice and in corporate legal departments.

He has also worked as computer network administrator and database administrator. He has been fascinated by computers and software since getting his first computer in college, an IBM PC-XT. Its 10 MB hard disk seemed to be immense.

Although he is an attorney, he dislikes legalese and prefers plain English. He focuses on making complex topics more understandable.

He now resides in Spokane, Washington.

Well done! Very concise and well written, as Brett says, in plain English. I think few would have trouble following it, especially If they’ve see phishing emails before. As a retired investigator with both professional and personal experience combating phishing scams, I highly recommend this book for those interested in learning to identify and combat these scams. It may even point out some things a professional might not have thought of.

You have subscribed to alerts for Brett Smith.

You have been added to Brett Smith's favorite list.

You can also sign-up to receive email notifications whenever Brett Smith releases a new book.