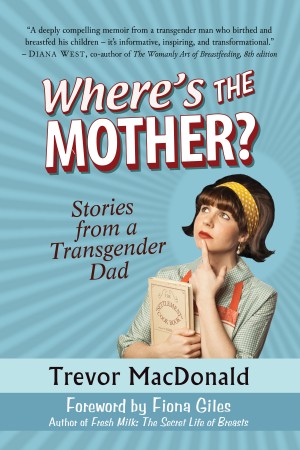 Where's the Mother? Stories from a Transgender Dad

By Trevor MacDonald
“A deeply compelling memoir from a transgender man who birthed and breastfed his children – it’s informative, inspiring, and transformational.” – DIANA WEST, co-author of The Womanly Art of Breastfeeding, 8th edition More
In a time when to most people “pregnancy” automatically means “motherhood,” what is it like to get pregnant, give birth, and breastfeed a child all while being an out transgender man?

When Trevor MacDonald decided to start a family, he knew that the world was going to have questions for him. As a transgender man in a gay relationship, Trevor has gone through the journeys of pregnancy, childbirth, and nursing all while exploring (and sometimes defending) his role as a trans dad. Trevor and his partner tackle all the questions new parents are familiar with, such as: Should we feed our baby breast milk or formula? Should we have a hospital or home birth?

Other questions are much less familiar: How can a man cope with gender dysphoria when going through such female-coded rituals as childbirth and breastfeeding? How can a person breastfeed after having had chest masculinization surgery? How do we find donor milk to supplement our own modest milk supply?

Luckily for the reader, Trevor explains his own answers to these questions with grace and humour. His stories convey the intimate and sometimes surprising realities of the transgender parenting experience. This memoir is a book about being a breastfeeding parent and a transgender man, and the many beautiful, moving, and difficult ways these two identities collide. It shows us that, ultimately, the parenting journey is beyond all our assumptions and preconceptions. “Where’s the Mother?” is a memoir about love and family like no other.

Trevor MacDonald started his blog, www.milkjunkies.net, to share his experiences of transitioning, becoming pregnant, and breastfeeding with the use of supplementary donated human milk. Since 2011, milkjunkies.net has received over 600000 visitors.

Trevor founded the first online support group for transgender people interested in pregnancy, birth, and breast or chestfeeding. He has initiated and helped to design and carry out a study funded by the Canadian Institutes of Health Research on the experiences of trans-masculine individuals with pregnancy, birth, and infant feeding.

He received international media attention in 2013 when his application to volunteer with his local chapter of La Leche League, a worldwide breastfeeding support organization, was blocked on the grounds of his gender identity. He successfully campaigned for a change to LLL’s policy in 2014.

Trevor is a Huffington Post featured blogger, and has appeared as a speaker and workshop leader at conferences such as Yonifest (with Ina May Gaskin and Michel Odent); the Philadelphia Trans Health Conference; the Canadian Professional Association for Transgender Health; the Canadian Association of Midwives; and the International Lactation Consultant Association, to name a few. He frequently presents educational sessions for church groups, university courses, LGBT youth groups, and health care workers.
Trevor lives near Winnipeg, Manitoba, Canada. This is his first book.

You have subscribed to alerts for Trevor MacDonald.

You have been added to Trevor MacDonald's favorite list.

You can also sign-up to receive email notifications whenever Trevor MacDonald releases a new book.