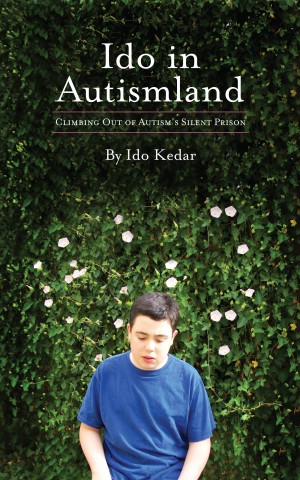 Ido in Autismland. Climbing Out of Autism's Silent Prison.

By Ido Kedar
"Not speaking is not the same as not thinking." In this remarkable series of essays, a nonverbal autistic teenager, Ido Kedar, argues that severe autism is not a cognitive disorder but a mind/motor disconnect. Chronicling his own story of learning to communicate through typing which enabled him to thrive in a normal education, Ido advocates for a change in the way people with autism are taught. More
What is autism? Is it a long list of behaviors, or is it more? Experts looked at my outside deficits—eye contact impairment, hand flapping and social delay–and concluded that my inside was equally impaired. They assumed I did not understand language, recognize my parents or have a thought more advanced than a toddler’s. They supposed my brain could be molded in increments by drilling me on names and basic nouns, or by telling me to jump, or sit, or touch my nose—over and over. This was the educational model I grew up with. Now, I am telling you what I couldn’t tell my experts when I was stuck in my silent prison for so many years: you were wrong. Worse, you were treating the wrong symptoms.

In my essays I explain autism from the inside out. It is my dream that my book will help my friends and so many other non-verbal autistic people to be liberated, as I was. I want a cure and I want communication now for all those still trapped in silence. Thank you for listening to a silent boy no more.

Ido Kedar is a nineteen year old with severe autism. Unable to communicate beyond his basic needs verbally, Ido has learned to communicate his eloquent and profound thoughts via an ipad, keyboard or letter board, typing with one finger. For the first seven years of his life, Ido was completely locked in silence, unable to demonstrate his intelligence or to convey his thoughts to others. As a result, like so many others with autism, he was relegated to a remedial and repetitive education in an autism class reviewing the alphabet, single digit arithmetic and the weather year after year. Ido finally was integrated into general education in middle school, thriving academically with no academic modifications and paving the way for other students with autism who type. In 2015 he graduated high school ranked fourth in his graduating class. He has plans to attend college.

Ido has been a tireless advocate for the rights of people with autism to be taught communication and to receive a normal education. He argues that his disorder is not a cognitive one, as is widely believed, but rather is a severe disconnect between his mind and his motor system. When he was a young teenager Ido felt a compelling need to address these misconceptions. The essays he wrote, from the age of twelve to fifteen, comprise his book, "Ido in Autismland," and serve to explain autism from the inside and out. His book has been a beacon of hope for families and people with autism and has already made a huge impact in changing perceptions and lives.

Ido is the recipient of numerous advocacy awards and has been profiled in the media. He enjoys hiking, bicycle riding and cooking. He blogs at www.idoinautismland.com and can be followed on facebook as idoinautismland.

You have subscribed to alerts for Ido Kedar.

You have been added to Ido Kedar's favorite list.

You can also sign-up to receive email notifications whenever Ido Kedar releases a new book.