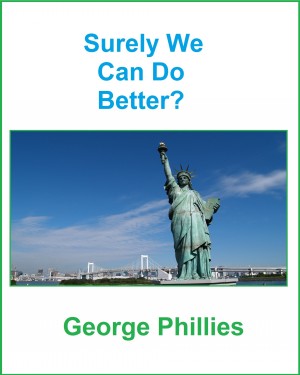 Surely We Can Do Better?

George Phillies is a retired Professor of Physics. He also taught in Biochemistry and in Game Design. His scientific research is focused on polymer dynamics. He also writes science fiction novels and books on politics. Books by George Phillies include:

Fiction
This Shining Sea
Nine Gees
Minutegirls
The One World
Mistress of the Waves
Against Three Lands
Eclipse, The Girl Who Saved the World
Airy Castles All Ablaze
Stand Against the Light
Inpreparation: Practical Exercise

Books on Politics
Stand Up for Liberty!
Funding Liberty
Libertarian Renaissance
Surely We Can Do Better?

Reviews of Surely We Can Do Better? by George Phillies

You have subscribed to alerts for George Phillies.

You have been added to George Phillies's favorite list.

You can also sign-up to receive email notifications whenever George Phillies releases a new book.