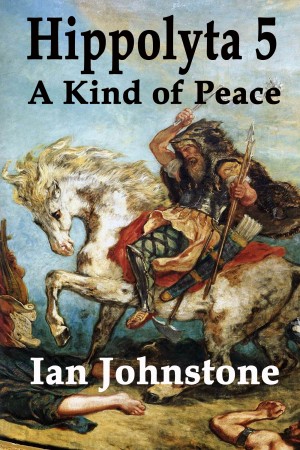 Hippolyta 5: A Kind of Peace

By Ian Johnstone
After many years of peace, Hippolyta’s realm was facing a threat from tens of thousands of Hun and Alani. Did Hippolyta’s army of Amazon women still have the fighting skills they had used to defeat previous invaders? And were Danilo’s talents beginning to fade with age; would he be able to gather the information of the enemies’ plans and movements that had been so crucial in previous conflicts? More
There had been many years of peace in Hippolyta’s realm and it had become an important trade route and port on the Black Sea, but Hippolyta’s army of Amazon warriors were still as ruthless and efficient as they had been during the wars against Attila the Hun and against the Alani. Unexpectedly, there was once again a threat. Traders were being robbed and killed, and there were still those who wanted revenge for past defeat and humiliation by Hippolyta.

Tens of thousands of renegade Hun and Alani, together with bandits, thieves and murderers were determined to overthrow Hippolyta’s rule and her treaties with neighbouring realms. Was it possible that this time the invaders could be repelled by bluff and diplomacy, or would the Amazons once again have to fight for their survival? Could Hippolyta rely on Danilo, her barbarian hunter and protector, to once again seek out and provide her with the information that had been so vital in former conflicts, or were his skills beginning to fade with age?

About the Series: Hippolyta

Warrior Queen of the Amazons