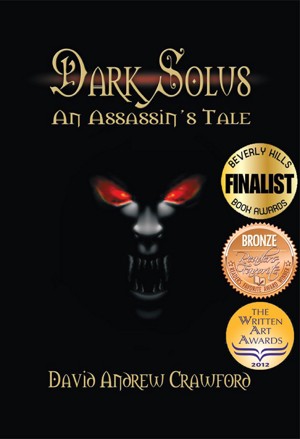 By David Crawford
Action-packed novel where mythological creatures and deadly assassins armed with magical lethal devices abound. One lone man will exact his revenge for the merciless execution of his parents. Trained in the black arts by Mephisto, an ancient silver dragon and by the shadow assassin that guards the very gates to Hell, Dark prepares for his lone mission and has one goal...to kill them all! More
Dark Solus, An Assassin's Tale is a dark, science fiction fantasy novel about one of the deadliest assassins on the planet Eorth. The evil wizard Kalifen, along with the ruthless leaders of the Assassins, Thieves and Halflings guilds, murdered Dark Solus' parents when he was only a child. Haunted by their merciless execution, he now waits and prepares to exact his revenge on all those responsible for their demise. Dark is transformed and trained by the Styg, the warden of the Stygian depths, and his grandfather Mephistopheles, an ancient silver dragon. Twelve years later, Dark is now ready to travel to the City of Duergar, the home of his enemies. Trained in the skills of assassination, and armed with lethal magic devices and knowledge of the dark arts, he has set himself only one mission.....to kill them all! This action-packed book comes alive with ancient imagery, in a time before solid boundaries formed between the mystical kingdoms of Faërie and the mortal world of man.
Available ebook formats: epub mobi pdf rtf lrf pdb txt html
First 20% Sample: epub mobi (Kindle) lrf more Online Reader
pdb
Price: $0.99 USD
Buy Add to Library Give as a Gift
How gifting works
Create Widget
Tags: assassin legends revenge wizards dragons demons fairies myths spells award winner actionpacked magical items sommerset
About David Crawford