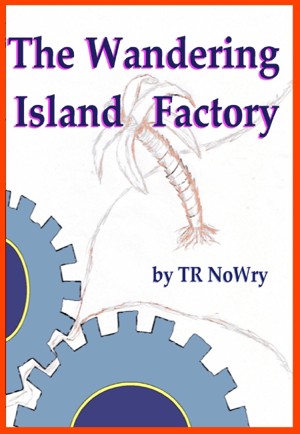 By TR Nowry
Rated 3.50/5 based on 4 reviews
A strange behemoth of a boat is parked off the coast of Hawaii, but it isn't alone. On the shore are dozens of protesters, and in the legislature are dozens of greedy politicians promising to lower their roadblocks if the deep pockets of this new industry make the right campaign contributions. No, this boat is surrounded on all sides by controversy.

I'm an Indie author living in Bumpass (yes, there really is a place called Bumpass). Indie, in my case, means no cover artist, no editors, and no marketing of any kind. For good or bad, it's just me, a taped together laptop bought in '03, and some horrendous credit card debt for over a decade of typing.

The Hummingbird Series was written with each book more like a season on a TV series than what some may expect from a 'traditional' or 'mainstream' series from those Publishing House factories. It starts with The Art of the Houdini Scientist, then continues with Patent Mine, Hell from a Well, The Heredity of Hummingbirds, Mourning after Dawn, Daughters of Immortality, and Waffen, with others on the way.

Questions or comments? They're always welcome at my Xanga blog or Facebook (TR Nowry). I'll be sure to answer... on those months I can afford to pay my phone bill. Found some typos and have a hankering to help an indie author instead of hurling stones? Both sites work well for that too.

Please continue to support your favorite Indie authors by recommending them to your friends and writing thoughtful reviews, it's the only marketing most of us will ever get!

Reviews of The Wandering Island Factory by TR Nowry

This story is a well disguised rant about global warming. The plot is a young man working at a factory making ships and islands out of artificial pumice using lava from a Hawaiian volcano. I don't know if it is possible to find materials that can work with molten lava, but I can accept that part of the premise. He has a girlfriend who was sexually abused by a coach and thus will not do anything physical with him beyond a kiss on the lips. When civilization collapses they take a barge that factory has made and try to sail from Hawaii to California.

Quite early in the story he begins ecology bashing by making a pitch for ocean thermal energy and claiming it is not used because of political protests, not that I've heard of any. All I've heard is that ocean thermal energy doesn't make any economic sense, but I haven't looked into it. If it works, fine. What doesn't work is the notion that solar output is the reason for climate change. Solar output has changed recently, this is something I have looked into. Solar output is down. We have passed the 400 year warm cycle and are now early in a 400 year cool cycle. Were it not for the increased carbon dioxide caused by burning fossil fuels we would be going into another Little Ice Age.

Instead he has solar output increase -After the climate has already changed by the way- and that causes sea levels to rise at a rate that is just not possible without heating the Earth enough to boil the oceans. It will take the ice caps a few thousand years to melt. The total sea level rise if all the ice on Earth melts is three hundred and something feet, but none of this elementary science is taken into account. I don't think that was because it was needed by the plot, the plot is too thin to be the excuse for any lapse of science. But of course, climate change deniers don't believe in science.

The title has shades of Roald Dahl about it, that deceive the inner eye. In the grand science-fiction tradition of Jules Verne, the hero of the story is a new technological marvel, conceivably just round the corner, if not completely round the bend, from present engineering capabilities. The 21st-century Propeller Island, to which the title might allude, is a manufactured floating island of lava piped into solid interlocking blocks of pumice, lighter than water but immensely strong.Eventually, even pumice will sink and break up, unless somehow impregnably water-proofed and reinforced against hundred foot waves. Like every good science-fiction writer, he knows how to sweep past the main practical objection, in a sentence, buried amongst all the plausible circumstantial construction details of this prestige project.

The story takes its time, thru a long slow development of man trying to get by, and get along with a mate. Will patient devotion pay off? Will the jobs and the money and the relationship run out? Jules Verne would never get us down with such mundane considerations.

Like TR Nowry, Verne (From The Earth To The Moon) was aware of the shortcomings of the solar science of his day, before solar fusion was understood. Whereas Nowry picks up on the respectable alternative science hypothesis that climate change is mainly dependent on fluctuations in solar radiation, connected with sunspot activity. (Veteran popular science writer, Nigel Calder co-wrote a book with one of its leading scientists.)

As the seas rise, under global warming, a sort of Swiss family Robinson embark on a miniature version of floating volcanic island, in a basalt block of a boat. In this way, they seek to avert the worst effects of the solar apocalypse. They are perhaps as much a danger to themselves as is global warming. The heroine has a “morning cough.” All of them are more or less heavy smokers of “cancer sticks,” as cigarettes are aptly described in the story. It will transpire that the author is as addicted to those cancer sticks for the planet, of uranium fuel rods.
The heat from the volcanic rock of an artificial island can be harnessed (with steam turbines) to generate electricity. More permanently, geothermal (or hydrothermal) energy can be created by the difference in heat between surface water and cool ocean depths. (The thermodynamics of the Carnot heat engine.)
The author suggests that the resulting surface cooling effect might prevent the onshore devastation of hurricanes.
However, the author or narrative character deprecates wave power. Wind turbines, he insists on calling “unsightly” “windmills,” like any propagandist for nuclear power.
Of a rising sea level, drowning nuclear power reactors, needing water cooling by sea or river, all the narrator can say is that he doesn’t see any three-eyed fish.
While politicians are regarded as totally unscrupulous as money sharks, and no cynicism is spared for human folly, the narrator promotes uranium reactors - forever poisoning the planet to drive turbines a few decades - instead of allowing the wind to drive turbines for free. People are indeed strange.

I am glad I read all TR Nowry's other books before reading this one. While it is a good book, I don't think it is as good as the others. The author states as much in the comments as why it was offered free.

Good book but not as good as other Nowry offerings.

This is a nicely written story engaging enough to keep me entertained during my plane flight home.
Jason is working on a floating machine that builds boats and islands out of lava, and he spends his days off with his internet-found girlfriend. He is the most developed character, but still we don't really feel we know him.
Should we carbon-tax companies out of existence because we are worried about global warming of a part of a degree, or do we try to counteract the unemployment and the much larger effect caused by solar storms. For sure, Jason has no control over the issue, and he just struggles to move from one job to another. One thing we learn, again, is that politicians are never the people to actually try to define and solve a big problem.
Our characters find themselves caught up in a major world catastrophe where most of the solar ice melts, and they opt to live on their little floating island and survive by fishing, and later trading with land-bound groups of refugees. It was hard to experience the characters emotions because it always seemed we were at a high level and just observing. More dialogue between the characters and more attention to the feelings of the people during the scene would help the reader to feel they are part of the story and to experience the emotions better. I would give this book a 3.4 star rating, a little above average.

You have subscribed to alerts for TR Nowry.

You have been added to TR Nowry's favorite list.

You can also sign-up to receive email notifications whenever TR Nowry releases a new book.