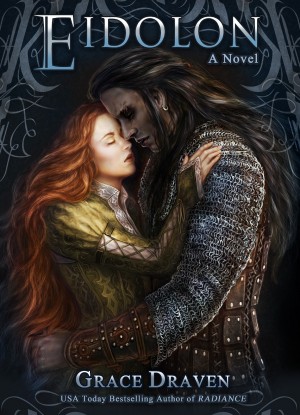 By Grace Draven
Rated 5.00/5 based on 4 reviews
Sequel to RADIANCE - The Shadow Queen of Haradis has unleashed darkness into the world. Her son Brishen suddenly finds himself ruler of a blighted kingdom. His human wife Ildiko must decide if she will give up the man she loves in order to save his throne, and a reluctant king will raise an army of the dead to challenge an army of the damned. A tale of alliance and sacrifice. More
Sequel to RADIANCE and Book #2 in the Wraith Kings series.

In a bid for more power, the Shadow Queen of Haradis unleashes a malignant force into the world. Her son Brishen, younger prince of the Kai royal house, suddenly finds himself ruler of a kingdom blighted by a diseased darkness. His human wife Ildiko must decide if she will give up the man she loves in order to save his throne.

Grace Draven is an author and Louisiana native living in Texas with her husband, three smalls and a big doofus dog. She has lived in Spain, hiked the Teton Mountains, honeymooned in Scotland, ridden in competition rodeo and is the great great granddaughter of a Nicaraguan president. She also hates doing laundry and refuses to iron anything.

Grace has loved storytelling since forever. She published her first short story with Amber Quill Press and has since written several other tales. A love of the bad boy in fiction always inspires her.

Reviews of Eidolon by Grace Draven

I just realized that I have neglected to write a review for this book! (This may have something to do with finishing it during the wee hours of the morning away from my computer...). I think I may have loved this better than "Radiance," and I did go back and re-read "Radiance" almost immediately after finishing this its sequel (I purchased the first through Kobo).
Unlike the first tale which follows one story line, this tale follows two parallel stories. The intensity of the relationship development was gut wrenching and very believable given the stress and strain our main hero and heroine were under. The subtle political intrigue was handled quite nicely and Ms. Draven takes a very sober look on the realities of the pressures, responsibilities, and demands of cross cultural relationships and neither sugar coats nor idealizes them.
While the first novel ended on a cliff hanger, this novel ends with the feeling that the story is "finished." But I hope that we see some more of Brishen and Ildiko, as well as some of the supporting characters (perhaps as heroes / heroines of their own stories?), in a future book or two.

Loved it! Beautifully written, unforgettable characters, emotional & suspenseful. I admit that I shed a tear (or two) reading this. So beautifully told and touching.

(reviewed 5 months after purchase)
Deborah Waller reviewed on May 30, 2016

This is the perfect sequel to Radiance. Grace is a refreshing author to read and manages to write excellent fantasy whilst avoiding the common plot ruts that some fantasy storys end up following.

Brilliant. I look forward to reading more of her books.

It's a Grace Draven - do I need to write more? Don't start with this one if you haven't read "Radiance" but if you already love that one you'll adore this book too.
Buy - read - enjoy.

You have subscribed to Smashwords Alerts new release notifications for Grace Draven.

You have been added to Grace Draven's favorite list.

You can also sign-up to receive email notifications whenever Grace Draven releases a new book.