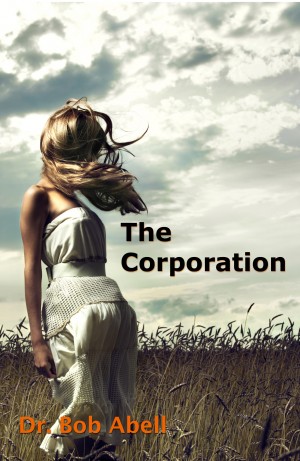 By Dr. Bob Abell
It is 2039. The World has been dramatically altered. In the chaos following a mysterious illness, democracy has collapsed. Much of the world is controlled by "The Corporation" and a handful of families known as "the Entitled". Reviewers said of "The Corporation": "Abell's characters walk right off the page.... brilliant cryptic allusions to dangerous trends in our society hit the mark." More
The Corporation:

It is 2039, and the World has been drastically altered. In the anarchy following a mysterious illness that killed millions, democracy as we know it has collapsed – and with it the living standards and even the lifespan of the majority of working people. Most of the countries of the world are controlled by "The Corporation", comprised of the CEO and a handful of families known as "the Entitled", who have power of life and death over everyone in their domain. The CEO, driven by internal conflicts, personal secrets, and a lust for power and control, has his own ideas for the evolution of life on the planet. Then personal tragedy strikes a young geneticist working in one of the Corporation's labs, setting in motion a series of events that unlock the past, and might provide a path to unravel the control of the Entitled.

One readers comment:
"This fast moving, concise novel gripped me from the first sentence. Abell has tailored it for the busy reader; he doesn't waste one word. A brilliant novel-in-a-nutshell!

"Abell's characters walk right off the page and into a world not so different from ours. His spare descriptions demand attention: they flag you down. Brilliant cryptic allusions to dangerous trends in our society hit the mark.

Bob was born during WWII and educated during the rapid changes of the 50's and '60s. Bob's interests extend far beyond science and computers, to history, archaeology, environment, government, and politics.

His favorite fiction authors range from Dickens and Twain to Michener, Dan Brown, Jane Auel, Barbara Kingsolver, Kathleen and Michael Gear, Jocelyn Picot, and J.K. Rowlings. Non-fiction interests have included Churchill's histories, Heyerdahl's voyages, John Perkin's "Confressions of an Economic Hitman", and most of the "escape" and "spy" books from WWII. These great authors have strongly shaped his own writing style, as well as his world view.

His undergraduate training was in science and education. He taught science for three years before resigning his position, sailing to Europe, buying a motorbike, and heading overland for S.E. Asia. After teaching in Melbourne, Australia for a year, he returned to Canada and enrolled in a Ph.D. program in Education, specializing in computer applications to education - at a time when computers themselves were still very new.

After a stint in academia, Bob went into the educational consulting and technology development business. He has been in that field ever since, along with his wife and at one time or another, both of his children. His business focus has been on technical development and writing for e-learning, with primarily electronics, military, aerospace, and healthcare clients.

In another adventure, in 2015 Bob converted his dystopian fiction, "The Corporation", into a screenplay called "Corporate Prey". He then went on to direct and produce a full length feature film based on the novel.

In December 2019, "Corporate Prey" was an official selection of the London Lift-off Film Festival Online It was also nominated for Best Picture and Best Cinematographer by Maverick Movie Awards for 2019.

Reviews of The Corporation by Dr. Bob Abell

You have subscribed to alerts for Dr. Bob Abell.

You have been added to Dr. Bob Abell's favorite list.

You can also sign-up to receive email notifications whenever Dr. Bob Abell releases a new book.