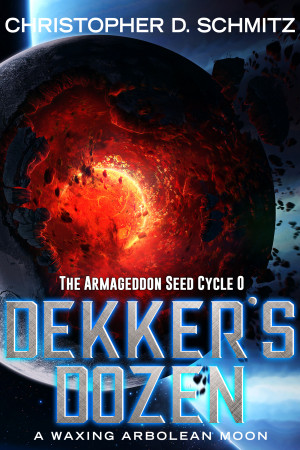 By Christopher D Schmitz
Spanning the planting of the Circle of Seven to the day Dekker Knight meets Vesuvius Briggs, A Waxing Arbolean Moon is an origins/prequel that fills in all gaps in the fractured timeline of Dekker’s Dozen: The Last Watchmen and functions as either Prologue or Epilogue depending on how you choose to look at it. Say yes to steampunk time-travel, King Solomon vs Asmodeus, and aliens in Akkadia/Egypt. More
The demon Dione existed before the dawn of time. Surely she was created alongside the very Divine Machine she came to loathe so much. From Dione’s seduction by Asmodeus and imprisonment at the hands of King Solomon to her release by an unwitting archaeologist, the timeline is punctuated with the baal’s influence and its counters by the time-traveling Ezekiel who repels the Arbolean invasion during the infancy of the Akkadian Empire with the weapons of an ancient Greek tinkerer

Spanning the dawn of creation and the planting of the Circle of Seven to the day Dekker Knight meets Vesuvius Briggs, A Waxing Arbolean Moon fills in all gaps in the fractured timeline of Dekker’s Dozen: The Last Watchmen and functions as either Prologue or Epilogue depending on how you choose to look at it.

Before the chaos of steampunk time-travel, cyborg ninjas, plant-spore-controlled unicorn zombies, ghost warships, and Hassidic superweapons of The Last Watchmen, A Waxing Arbolean Moon pulls back the curtain on the galactic and celestial backstories.

About the Series: Dekker's Dozen

The Magnificent Seven in space, as it's been called. Feeling like a blend between Firefly and Dark Matter, this high stakes space opera features steam punk time-travel, space ninjas, and really big guns!