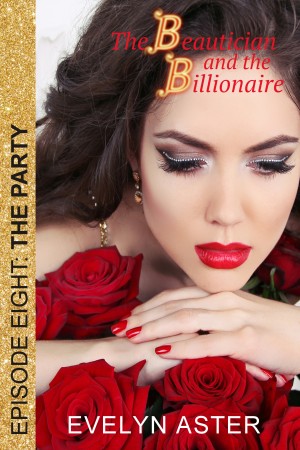 The Beautician and the Billionaire Episode 8: The Party

With the contract behind them, Charisse is determined to show Conor how much she cares about him. But her constant and mysterious fatigue threatens to keep her away from the party he's been guilted into giving for his dead wife's sister. After fainting just before the party, Charisse makes her way downstairs only to be accosted by someone from her past who she never wanted to see again. More
Excerpt:

Charisse rested her hand on his cheek, admiring the straight nose and defined jaw line. She still hadn't returned his “I love you.” Part of her wished she could wake him up and tell him now, while the other part still wanted to wait. It was too soon after the contract, too soon after churning up the past with Josh and too close to the party for Becca. She wanted to give her emotions for him time to grow and bloom. At least he hadn't brought up her hesitation.

Keeping her hand on his cheek, she slid closer to him and brushed her lips against his.

“Mmmm,” he said without waking up.

She wished she hadn't been so tired when they arrived. She'd wanted to end the day by making love to him, but she'd crashed out immediately after changing into a knit cami and shorts set she'd found in her suitcase.

Lifting her head slightly off the bed, she saw that it was four in the morning. He probably wouldn't want to be woken up right now. Besides, she'd never initiated a seduction. Her attempt would most likely be laughable. Still, her core craved physical intimacy in a way she'd never experienced before. She couldn't tell him she loved him, but she wanted him to know she desired him and cared for him more than any other man.

She pressed her lips against his, gently but harder than a moment ago.

Evelyn Aster writes romance for grown-ass women. She loves heroines who make mistakes and have real problems just like her. Mostly, she lives, writes, drinks coffee and eats chocolate in Albuquerque, NM. She's managed to avoid being a meth dealer so far.

Reviews of The Beautician and the Billionaire Episode 8: The Party by Evelyn Aster

You have subscribed to alerts for Evelyn Aster.

You have been added to Evelyn Aster's favorite list.

You can also sign-up to receive email notifications whenever Evelyn Aster releases a new book.