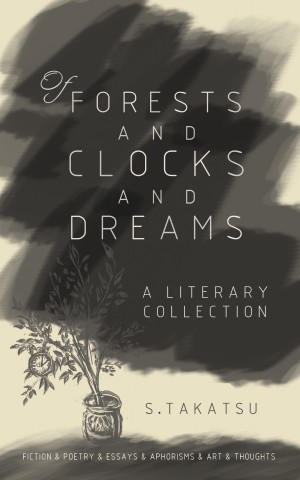 Of Forests and Clocks and Dreams

His work paints surreal visions and explores philosophical themes of the human condition and spirituality, subjective perception and the nature of reality, the system and the cosmos through strange conversations, umbrellas, a talking bird, a girl with a top hat, grandfather clocks, transfigured stones, a missing archaeologist, bowls of rice, a man with twelve toes, and more.

The book features the award-winning transcendental "The Elephant Girl", a heartbreaking "Sometimes I Think You Can't Hear Me", the magical fable "By The River" and political essay "It's Pouring, Bring Two Umbrellas".

"[His stories] have a timeless quality, little legends or fables that enlighten or explain a philosophy of life, a zen moment... [they] touch on an innate mystery of things that allow one to see." - Patricia Keeney, York University Creative Writing Professor, Award-winning Poet, Critic and Author of One Man Dancing

He continues to work with Inspiritus Press to envision a cross-disciplinary arts collective and community of avant-garde, thought-provoking, transcendental, experimental, counter culture work, championed by upbeat unconventional grassroots digital strategies, events and multimedia technology. He won York University’s Stanley Fefferman Award in 2014 and the Babs Burggraf Award of $2500 for his short story “The Elephant Girl” in 2016. He is influenced by writers such as Murakami, Borges, Orwell, DeLillo, Kafka, Carver and the ideas of Mumford, Graham Hancock, Baudrillard, Jung, Wyndham Lewis, McLuhan, Hegel, and Marx.

“Takatsu is a fascinating writer, musician and illustrator and is at the forefront of transmedia storytelling.” – Rowena Wiseman, Author of “Searching for Von Honningsbergs”, “The Replacement Wife”, “Bequest”, “Silver”.

“[His pieces] have a timeless quality… that enlighten or explain a philosophy of life, a zen moment… [and] touch on an innate mystery of things that allow one to see.” – Patricia Keeney, Professor of Creative Writing, York University, Award-winning Poet, Critic, Author of “One Man Dancing” and more.

“I am awestruck at the philosophical stance of your writing. Your writing is akin to that of Murakami in its surrealist execution.” – Shane Oltingir, Wattpad Reader

“Amazing how well you implement the first-person point of view… Hackneyed and cliche, some have said, but there’s just something about good writers and first person novels. You are definitely in one of them. Your voice really comes through. Some people will disagree and say, ‘Well of course. He’s writing in first person. It’s suppose to engage you in such a way.’ But I would have to say that not all first-person novels come through as clean as yours does. Simply amazing.” comments Diogenes Marx, a literary critic on Textnovel.

On “Of Forests and Clocks and Dreams”

“A thought provoking work that will leave the reader questioning the very existence around them… [Takatsu] always seems to be breaking the rules and combining various mediums of art… The pioneer of English Cell Phone Novels has continued to approach writing—and art as a whole—in different ways, breaking and manipulating constructs to produce work that, while still holding ties to the written word, manifests into something that defies its very foundation…A great glimpse into what the future of the written word—and art as a whole—can be.”
– C.J. Garrett, Author of “Memoirs of a Zygote (Trapped in a Human’s Body)”

On “Espresso Love“:
“Offers acute, almost painful observations of the minutiae of life, if life took place in a Murakami snow-globe.”
– Review on IndieReader Insiders

“Like a seven course meal full of spice and illumination… One does not listen to a classical piece to get to its ending. No. It is the ride, the moment by moment…a genuine Masamune among stories.”
– Textnovel author

“An interesting ‘vapoury’ style that seems to hover off world at times. …Author’s intent to invoke/evoke mystery is very effective…haunting and strange (which is good)…sense of terror in the core here… You’re on to something different, striking.”
– B.W. Powe, Associate Professor, Dept of English, York University and author of “A Tremendous Canada of Light”, “A Climate Charged”, “Outage”, “The Unsaid Passing”, and “Marshall McLuhan and Northrop Frye: Apocalypse and Alchemy”

You have subscribed to alerts for Takatsu.

You can also sign-up to receive email notifications whenever Takatsu releases a new book.