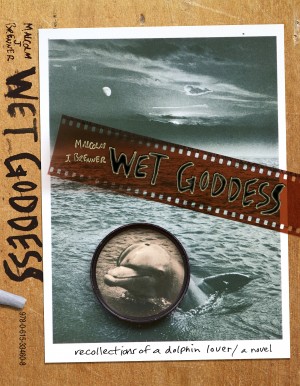 Rated 4.00/5 based on 3 reviews
In the 1970's, a hippie college student becomes infatuated with a female dolphin in a Florida amusement park. She edges her way into his slightly foggy mind, drawing him into her underwater world of sensual abandon and unexpected violence.

Excerpts from this novel have been published in PENTHOUSE and the classic anthology "Mind In The Waters." More
Set at the height of Vietnam protests, Jimi Hendrix and LSD, "Wet Goddess: Recollections of a Dolphin Lover" is a story of strange encounters, awkward misadventures and, ultimately, love.

Stoked on cheap pot and reports that dolphins possess near-human intelligence, liberal arts major Zachary Zimmerman couldn’t be more thrilled about his first pro photography job. The project: shoot a book about the stars of Florida Funland’s struggling dolphin show – while turning a blind eye to the writer’s affair with the head trainer.

But the writer isn’t the only one at Florida Funland looking for forbidden love. Ruby, a solo performer in the show, slowly edges her way inside Zack’s slightly foggy mind, drawing him deeper and deeper into her wet, wild realm of sensual abandon and unexpected violence.

Previously excerpted in PENTHOUSE and the classic Project Jonah anthology “Mind In The Waters,” this is the only authorized e-book edition of the long-awaited adult novel.

Malcolm J. Brenner was born in New Jersey in 1951. He attended public and private schools there and in Pennsylvania before entering New College of Florida in 1969, where some of the events on which "Wet Goddess" is based took place.

Brenner has worked many jobs, including wilderness tour guide, photo lab owner and public relations officer. During the 1990’s he covered the Navajo Nation and Zuni Pueblo as a reporter for border town newspapers in New Mexico. His hard-hitting investigative reporting, news photos and satirical columns won several regional awards.

Now a freelance writer and photographer, Brenner lives in Port Charlotte, Florida. He recently published "Mel-Khyor: An Interstellar Affair," a science-fiction novel about a woman's protracted experience with a crashed alien and its effects on her later life.

Review
Patrick Frerich reviewed on Feb. 19, 2013
(no rating)
I like the concept of expanding our definition of love, but it really didn't need to the transformation section, that was just bizarre.

An interesting read. I couldn't decide if this was all in his own mind or not.

Very telling, and very good for someone wanting to understand a more unusual form of relationship. The author really does a great job at pulling you into his mind, and into his experience, as well as the dolphin's.

Really amazing book. Well written, easy to understand even for non-native speakers like me. Completely changed my view of Zoophilia and life in general. I would really recommend this book to anyone who is not too closed minded to read it.

You have subscribed to alerts for Malcolm J. Brenner.

You have been added to Malcolm J. Brenner's favorite list.

You can also sign-up to receive email notifications whenever Malcolm J. Brenner releases a new book.