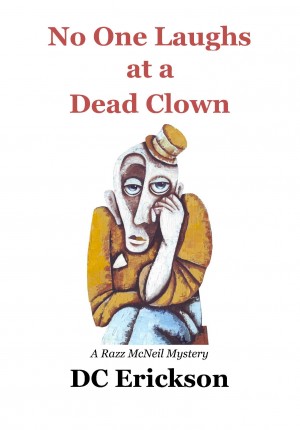 No One Laughs at a Dead Clown

No One Laughs at a Dead Clown captures the fun, sun, surf and danger of fictional San Margarita, California. “Named after Saint Marge, patron saint of tequila drinks, an ugly saint who magically gets better looking around two a.m., San Margarita is a coastal town renowned for its warm weather, beautiful beaches and even more beautiful women. More
When an amusement park clown is strung to pilings under the San Margarita Pier, a deadly message is sent. Then all hell breaks loose for aging surfer dude Razz McNeil, manager of the Surf’s Up Saloon, as he becomes entangled in the subsequent murder investigation. But who sent the macabre message? And why?

Razz is first accused of murder by his former friend, Police Sergeant Gerard “Sharky” Sampson, and then he’s enlisted to help solve the crime. Out of his element, but addicted to the thrill, Razz treads in the wrong places and on the wrong toes. All the while, he tries desperately to convince his wife not to divorce him and to convince himself he still deserves her. But when his sleuthing leads him to penetrate the dubious business dealings of his new boss, alleged drug lord Louis Marcayda, Razz becomes desperate just to stay alive.
Available ebook formats: epub mobi html
First 15% Sample: epub mobi (Kindle) Online Reader
Price: $1.49 USD
Buy Add to Library Give as a Gift
How gifting works
Create Widget
Tags: thriller suspense drug cartels mexican drug ring surf novel
About Dean Erickson

Dean Erickson is the founder and CEO of Bionic Capital LLC, a registered investment advisory firm. He worked on Wall Street as an options trader and risk arbitrageur after graduating from Brown University in 1982. He gained the Chartered Financial Analyst designation in 1987.

After Wall Street, he stumbled upon acting and enjoyed the creative process. He guest-starred on Frasier, starred as Gabriel Knight in the awarding-winning video game The Beast Within, and acted in several Shakespearean productions. He began writing and created multiple movie scripts before writing a mystery thriller, No One Laughs at a Dead Clown, under the name, DC Erickson.

When a computer glitch caused the loss of his outline for novel number two, he turned to the personal development genre. Choose Your Story, Choose Your Life was published months later. His most recent book Act. Adapt. Achieve. introduces his innovative Idea Circle™ which explains the process of achieving success. The book offers other tools and techniques to help readers achieve success more quickly and consistently in any endeavor.

Dean has worked full-time in the investment advisory business since 2006, and at Bionic Capital since its founding in 2009. He is happy to say he has created his perfect job, and he loves his boss.

Prophetically, he was voted Most Versatile by his high school senior class a long, long time ago. More recently, he was elected to the Midcoast Maine Sports Hall of Fame and the Maine Basketball Hall of Fame.

He lives in California with his wonderful wife, Lisa.

You have subscribed to alerts for Dean Erickson.

You have been added to Dean Erickson's favorite list.

You can also sign-up to receive email notifications whenever Dean Erickson releases a new book.