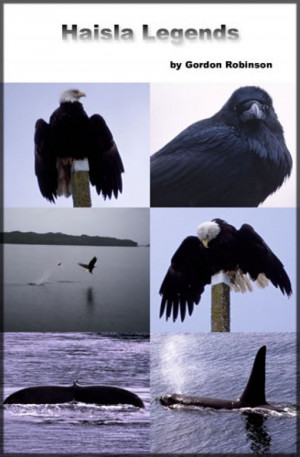 By Gordon Robinson
This book “H’aisla Legends” by Gordon Robinson of Kitamaat Village, B.C., was recorded into print for the first time in history from oral transmission through the ages. Gordon was a qualified school teacher graduating from Surpass College in Vancouver, and was a H’aisla historian. The true authors of the legends belong to the past. Published by Mark and Dale Robinson.
Available ebook formats: epub mobi pdf rtf lrf pdb txt html
First 25% Sample: mobi (Kindle) lrf pdb Online Reader
Price: $11.99 USD
Buy Add to Library Give as a Gift
How gifting works
Create Widget
Tags: legends first nations native haisla aboriginal
About Gordon Robinson

Gordon Robinson was born in Kitamaat Village on October 1, 1918. His people, the Haisla are a branch of the Kwakiutl enthno-linguistic group of people. The Haisla are also a part of the Wakashan linguistical group along with the Heiltsuk and Oweekeno. Kitamaat means 'People of the Snow' for the snowfall in the area was very great.

In 1949 he became Assistant Superintendent of the Kwakiutl Indian Agency at Alert Bay.

Gordon also served as Chief Councillor of Kitamaat Village from 1950-1954.

Before his retirement Gordon worked for the Department of Indian Affairs and was on the board of directors for the Kitimat Stikine Regional District.

Gordon passed away before he could update the booklet 'Tales of Kitamaat' with additional stories. Mark Robinson Gordon's son and Dale Robinson Gordon's nephew decided to complete the task and bring these timeless legends and stories.

You have subscribed to alerts for Gordon Robinson.

You have been added to Gordon Robinson's favorite list.

You can also sign-up to receive email notifications whenever Gordon Robinson releases a new book.