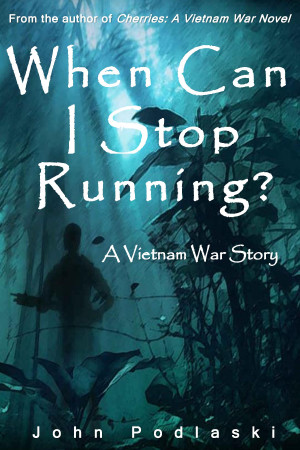 When Can I Stop Running?

Two teen soldiers spend a terror-filled night, alone, in a listening post - the military's version of a human early warning system - for the firebase. Visibility in the dense jungle is less than two-feet and imaginations run rampant; every shadow was suspect. As kids, we'd run as fast as we can to escape imaginary or perceived danger, but as soldiers in More
2019 KCT RRBC Runner-Up Silver Award Winner

The year is 1970, and the story follows the two soldiers - impressionable Detroit teenagers - during their long night in a Listening Post (‘LP’), some 200 meters beyond the bunker line of the new firebase. Their assignment as a "human early warning system", is to listen for enemy activity and forewarn the base of any potential dangers. As they were new to the “Iron Triangle” and its reputation, little did they know that units before them lost dozens of soldiers in this nightly high-risk task and referred to those assigned as "bait for the enemy" and "sacrificial lambs".

Sitting in the pitch black tropical jungle - with visibility at less than two feet - John's imagination takes hold throughout the agonizing night, and at times, transports him back to some of his most vivid childhood memories - innocent, but equally terrifying at the time.

As kids, we instinctively run as fast as we can to escape imaginary or perceived danger, but as soldiers, men are trained to conquer their fears and develop the confidence to stand their ground and fight. Running is not an option.
Available ebook formats: epub mobi pdf lrf pdb txt html
First 16% Sample: epub mobi (Kindle) lrf more Online Reader
pdb
Price: $2.49 USD
Buy Add to Library Give as a Gift
How gifting works
Create Widget
Tags: vietnam war war in vietnam infantry jungle warfare novel about growing up cherries novel listening post
About John Podlaski

John served in Vietnam during 1970 and 1971 as an infantryman with both the Wolfhounds of the 25th Division and the 501st Infantry Brigade of the 101st Airborne Division. They awarded him the Combat Infantry Badge, Bronze Star, two Air Medals, and a Vietnamese Cross of Gallantry above others. He has spent the years since Vietnam working in various management positions within the automotive industry and has recently received a Bachelor of Science degree in Business Administration. John is a life member of Vietnam Veterans of America Chapter 154 and lives with his wife, Janice, in Sterling Heights, Michigan. They own a 1997 Harley Davidson Heritage and are both members of the Great Lakes Chapter of South East Michigan Harley Owner’s Group. Both retired in 2013 and enjoy not working anymore. John has authored and published six books: Cherries: A Vietnam War Novel, When Can I Stop Running?: A Vietnam War Story, Death in the Triangle: A Vietnam War Story, Unwelcomed: A Short Story, Unhinged: A Short Story, and 2-27-70: a Short Story. All these e-books are available on Smashwords.

Book Trailer
In 'When Can I Stop Running?' the author juxtaposes his nightmarish hours in the bush with some of his most heart-pounding childhood escapades. Readers will relate to the humorous childish antics with amusement; military veterans will find themselves relating to both of the entertaining and compelling recollections.

Reviews of When Can I Stop Running? by John Podlaski

I truly enjoyed this and all of John's books.

You have subscribed to alerts for John Podlaski.

You have been added to John Podlaski's favorite list.

You can also sign-up to receive email notifications whenever John Podlaski releases a new book.