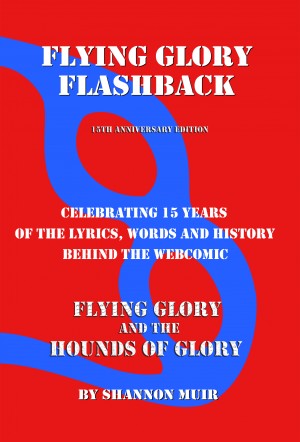 Flying Glory Flashback - 15th Anniversary Edition: Celebrating 15 Years of the Lyrics, Words, and History Behind the Webcomic Flying Glory and the Hounds of Glory

By Shannon Muir
Updated 15th anniversary text-only book of lyrics, along with the evolution of a webcomic storyline about a group of teen musicians who also happen to be superheroes which celebrates a 15th anniversary milestone in June of 2016. Also contains character bios and timeline, and full information and added lyrics for the online Graphic Novel THE GIFT, released online beginning August 2015. More
For fifteen years, the webcomic FLYING GLORY AND THE HOUNDS OF GLORY continues to feature the adventures of super powered teen Debra Clay, known as Flying Glory, and her backing band the Hounds of Glory. She's mentored by her grandmother Elsie Stokes, who served as Flying Glory during World War II. The webcomic launched in the summer of 2001 with a four page short, soon followed by a twenty nine page first issue. Artwork is drawn by Kevin Paul Shaw Broden, who co-writes the adventures with Shannon Muir. Currently, each issue is twenty-four pages in length and generally posted as one page weekly in black and white. As of June 2011, the tenth anniversary of the webcomic, the website features roughly 350 comic story pages.

Now for the first time, every "song" from within the comic appears complete and with one volume, accompanied with introductions to each section explaining the creative development behind the storylines from each period. In addition, get a rare opportunity to read material written by Shannon Muir before the inception of the concept as well as material from the FLYING GLORY AND THE HOUNDS OF GLORY Christmas story THE GIFT, including details about it actually being released and additional lyrics. New features include character bios and a timeline listing. This text-only volume includes a special introduction by artist, co-writer and FLYING GLORY creator Kevin Paul Shaw Broden.
Available ebook formats: epub mobi pdf lrf pdb txt html
First 5% Sample: epub mobi (Kindle) lrf more Online Reader
pdb
Price: $0.99 USD
Buy Add to Library Give as a Gift
How gifting works
Create Widget
Tags: teen superheroes lyrics webcomics comic history flying glory flying glory and the hounds of glory webcomic history
About Shannon Muir

SHANNON MUIR's short stories include suspense and mystery elements such as those found in her first full-length story from Pro Se Press, CHARLES BOECKMAN PRESENTS DOC AND SALLY IN "THE DEATH OF BUDDY TURNER". Additionally, she's written short stories for Pro Se Press such as “Tragic Like a Torch Song” in THE DAME DID IT from Pro Se Press, "Pretty as a Picture" in the anthology NEWSHOUNDS, “Tropical Terror” in CRIME DOWN ISLAND and “Hidden History” in EXPLORER PULP. She’s also written the Single Shot New Pulp tale “Ghost of the Airwaves,” a short story offered in electronic format only from Pro Se Press.

In other genres, Shannon's published short stories include “Meeting the Monster” in the Emby Press anthology SUPERHERO MONSTER HUNTER: THE GOOD FIGHT and "Cover Story" in ARIA KALSAN: MYSTERIES OF THE FUTURE.

Shannon holds a BA in Radio-TV and English from Eastern Washington University in Cheney, Washington, which she considers to be her hometown. She also holds an MA in Communications from California State University, Fullerton, along with additional education in screenwriting, project management, library technician studies, and most recently a certificate earned with distinction in General Business with Emphasis in Marketing from UCLA Extension. Currently, she is working on a Masters of Library and Information Science at San Jose State University.

She is a member of Sisters in Crime (national, Guppies, and Los Angeles, where she also served on the Los Angeles board for a two terms beginning in 2018), as well as the Toastmasters4Writers Chapter of Toastmasters International (where she serves as chapter Secretary), Women in Animation, and a Professional member of ASIFA-Hollywood.

Reviews of Flying Glory Flashback - 15th Anniversary Edition: Celebrating 15 Years of the Lyrics, Words, and History Behind the Webcomic Flying Glory and the Hounds of Glory by Shannon Muir

You have subscribed to Smashwords Alerts new release notifications for Shannon Muir.