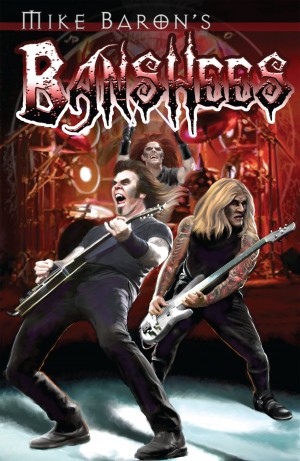 In Crowd sends hot young reporter Connie Cosgrove to cover the Banshees along with that old burn-out Ian. Ian falls hard for the stunning Connie who regards him with a mixture of disgust and amusement. As if!

The Banshees phenomenon goes viral--are they real or is it all a brilliant publicity stunt? Every time Banshees play someone dies. Is it bad luck or part of some diabolical plan? As Connie and Ian dig into the Banshees' past they find disturbing links to black magic, the Russian mob and an ancient Druidic sect.

Death only adds to their mystique as the Banshees steamroll across North America toward a triumphant appearance at LA's Pacific Auditorium. Ian finally grasps the real reason they've returned--to tear a rift between our world and a monstrous evil-- a rift created by an infernal machine built into Pacific Stadium and powered by human flesh.

“I am a HUGE fan of Mike Baron's work. The biggest influence on my Catman interpretation was the Badger, without question.This guy was scary/funny before that was even a thing. Get this book, dammit!” --Gail Simone

"Baron’s book is a rocket blast of suspense that moves at breakneck speed. Along the way it is crammed with hundreds of hilarious cultural bon mots and innuendos that set it leagues above other mundane horror tales. “Banshees” is a brilliant achievement by a creative force that is just getting warmed up." --PULP FICTION REVIEWS

Born in Wisconsin, Mike Baron is best known for his comics work on Nexus, Badger, Punisher, Flash, Deadman, Star Wars, and Robotech. A perennial fan favorite, he is the winner of the prestigious Inkpot Award and the Eisner Award. He has written for every major comics publisher.

He broke into comics with Nexus, co-created with artist Steve Rude. Nexus currently appears monthly in Dark Horse Presents. Baron also created Badger, one of the longest-lived and most intriguing of independent superheroes. The Badger is a multiple personality, only one of whom dons a costume to fight crime. Badger returns this winter from a resurgent First Comics.

His novels include Skorpio, Helmet Head, Whack Job, and Biker. Baron lives in Colorado with his wife Ann and a bunch of mutts. bloodyredbaron.net.

Reviews of Banshees by Mike Baron

You have subscribed to Smashwords Alerts new release notifications for Mike Baron.

You have been added to Mike Baron's favorite list.

You can also sign-up to receive email notifications whenever Mike Baron releases a new book.