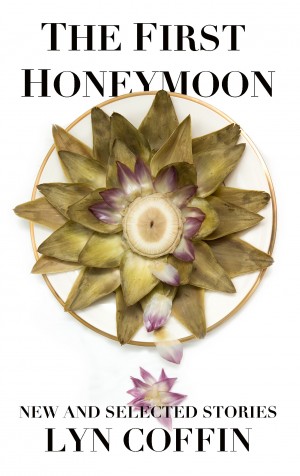 The First Honeymoon--New and Selected Stories

By Lyn Coffin
Literary short stories full of heart, humor and longing. Coffin’s fictions cross boundaries; they are funny, ominous and heartbreakingly true. "She masterfully reveals the small yet extraordinary moments which eventually become irrevocable fate. Fiction worth re-reading: witty, wise, deeply imagined.” More
Lyn Coffin writes with heart and humor of longing and searching—for place, for connection, for love. Here, among these 17 stories, an artichoke reveals for a young bride the fault lines already dooming her new marriage; a mother makes final amends for telling an unwelcome truth about Christmas by telling a comforting lie about death; a young girl navigates the madness of her mother, the possible evil of her father and questions about her own state of mind; and we are treated to an inspired retelling of the classic Tortoise and the Hare fable. Coffin’s fictions cross boundaries; they are funny, ominous and heartbreakingly true.

Who will enjoy this book: Fans of realist fiction, American fiction, poetry, and the literary fiction short story.

“Sexy, smartly engaging and quirkily off-beat, these stories are a delight to read and ponder.” – Judith Roche, National Book Award-Winning Author of Wisdom of the Body

Lyn Coffin lives and writes in Seattle, WA. She is an award-winning fiction writer, poet, playwright, and translator. More than 20 books of her writing have been published, and her plays have been presented internationally. Her short stories have appeared in magazines, journals and anthologies, including the Best American Short Stories edited by Joyce Carol Oates. She has taught literary fiction at the University of Washington and the University of Michigan, among others. Lyn holds an honorary PhD from the World Academy of Arts and Culture (UNICEF) “for poetic excellence and her efforts on behalf of world peace.”

You have subscribed to Smashwords Alerts new release notifications for Lyn Coffin.

You have been added to Lyn Coffin's favorite list.

You can also sign-up to receive email notifications whenever Lyn Coffin releases a new book.