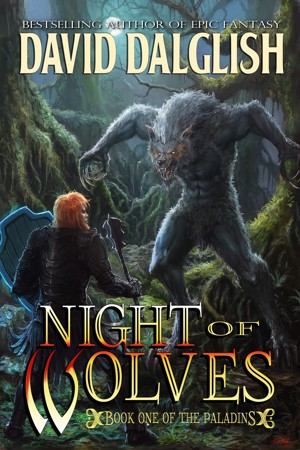 Night of Wolves (The Paladins #1)

By David Dalglish
Rated 4.33/5 based on 3 reviews
Wolf-men, savage creatures given humanoid form in an ancient war, mass along the Gihon River. Led by their packleader Redclaw, they seek to cross the river and claim a land of their own, slaughtering those that would stand in their way. Two paladins must lead the desperate defense to stop the invasion. More
"The humans are weak. Their skin is soft, and their minds dull from years of safety. We are the vicious. We are the destroyers. Come the full moon, when our goddess watches our victory, we will taste of their blood!"

Wolf-men, savage creatures given humanoid form in an ancient war, mass along the Gihon River. Led by their packleader Redclaw, they seek to cross the river and claim a land of their own, slaughtering those that would stand in their way. Two paladins, Jerico of the god Ashhur, and Darius of the god Karak, must lead the desperate defense against the invasion. Their friendship will be tested as their gods resume an unending war, and their very faiths call for the death of the other. Together, friend or foe, they must face Redclaw's horde.

NIGHT OF WOLVES by David Dalglish
Can faith remain when the gods call for blood?

Reviews of Night of Wolves (The Paladins #1) by David Dalglish

This book had two five star ratings on Smashwords, and was also Free. I saw that it was the beginning of a series (now up to five books I believe) and I thought I'd give it a shot. I've never been a true fan of paladins, but one of the reviewers said that Dalglish did a good job writing them. Plus, I needed a fantasy book to read, and this seemed interesting enough. I mean, it had wolf people, so that's always a bonus.

First off, the reviewer was right. Dalglish does a fantastic job writing paladins. Anyone who has grown up with any D&D books, be they Forgotten Realms, Dragonlance (with its own brand of holy knights), and the other worlds, will be familiar with this class. They will also be familiar with how annoying they could be, and how boring they were to play. However, Dalglish has done an amazing job making his paladins something more than just holy knights. He made them human, and gave them all the traits you would expect from a human who relies on their faith as a weapon/shield.

However, as well as Dalglish writes the paladins, he does a lesser job on Redclaw I found. Though the Wolf King was a good antagonist, when I reached a point about half way through the book where suddenly Redclaw is plagued with fears, I was surprised. Here was a character that for the first part of the book was portrayed as a fearless leader full of conviction and courage, only to suddenly find out he was riddled with fear. (or so it seemed) This broke me away from his character, and felt like a bid to make him more sympathetic as a villain. Unfortunately, all it did was make him less interesting. Had his character had this trickle of fear throughout the novel, his character would have been wonderfully flawed and easier to relate to.

Another element that caught me off guard was the suddenness of events involving Jerico's order. They seem to suddenly occur and everyone seems fairly quick to assume what they do about Jerico and his people. I found it weird that everyone suddenly seems to know what they do, and even Jerico himself seems partial to believing it himself. True or not, having so many people present the same idea as fact with no one really fighting against it just feels unnatural rather than the normal flow of things.

Dalglish does a great job with the combat scenes in this book. They flow easily, each moment moving seamlessly to the next. They are easy to picture in one's head and don't get bogged down with endless details. Each was filled with the right amount of excitement, bloodshed and the unknown that keeps the reader turning the pages. The spacing between scenes was also handled well and kept the general flow of the novel smooth.

'Night of Wolves' was a fun and enjoyable fantasy novel to read. I have already purchased the second book 'Clash of Faiths' and put the third and forth in my 'to buy' list once I am done the second tale. If you love fantasy, this book is for you. You can't beat the price (and if you don't like it, you lost time and nothing more), and if you like paladins, then that's more of a bonus. I have already recommended this book to my friends that are into fantasy, and I suggest you pick it up as well.

(review of free book)
humanitysdarkerside reviewed on May 2, 2013

Jerico's charm lies in his red hair, according to himself. As a Paladin of Ashhur, he fights for light/life/order. As fate would have it he has actually befriended a traditional Ashhurian enemy - a Paladin of Karak. Karak stands for dark/death (non-life)/chaos. Darius thinks his charm lies in his personality. These guys are really supposed to try to kill each other. Instead they are working together for the good of the village they live in and both of them struggle with their consciences because of it.

On the other side of the river that is next to the village Durham a clan of wolf-men live (see picture above). Well actually they are wolf-people because there are wolf-women too. The wolf-people are desperate to get away from the Waste (the place where they live). To do so they will even gather their clans together into a unit led by a wolf-king and try to attack the human side of the river.

Both Jerico and Darius are interesting personalities. Their struggles with their beliefs of what they are supposed to be like make for interesting tension in the novel. But the really fun parts come in the action that the wolf-people engender. We all know that I like action and "Night of Wolves" has plenty of it. The tone in the first novel of The Paladins is lighter than the tone in "The Weight of Blood". Interesting to see the difference between the two. I like authors who veer from formulas used with one character to try on something new. Good on you Mr. Dalglish.

What a great story. Love these guys

You have subscribed to Smashwords Alerts new release notifications for David Dalglish.

You have been added to David Dalglish's favorite list.

You can also sign-up to receive email notifications whenever David Dalglish releases a new book.