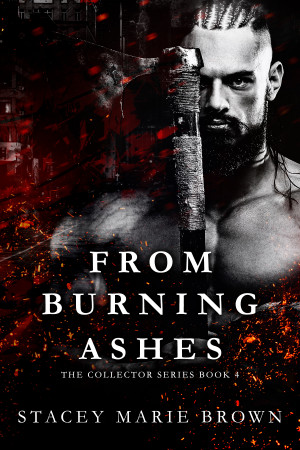 Killed by the man she loves, not even death is kind to Zoey. Neither life nor her fae powers will let her go in peace.

In this final installment, Zoey’s strength, determination, and trust are put to the ultimate test. In the fight to protect the people she loves and stop DMG from experimenting on fae, humans, and animals to create super soldiers, she learns the reality of how far Dr. Rapava will go to achieve his ultimate mission.

Of course, Rapava is not the only one willing to go to extremes. The demon, Vadik, is hunting Ryker, and there is nothing he won’t do to get back the property he feels is his: both Ryker and the Stone of Destiny.

Stacey Marie Brown is a lover of hot fictional bad boys and heroines who kick butt. Books, travel, TV series, hiking, writing, design, and archery. Swears she is part gypsy, being lucky enough to live and travel all over the world.

She grew up in Northern California, where she ran around on her family’s farm, raising animals, riding horses, playing flashlight tag, and turning hay bales into cool forts. Has always been fascinated by things dark and creepy, but needs to be balanced by humor and romance. She believes that all animals, people and the planet should be treated kindly.

About the Series: Collector Series

When devastation hits Seattle, Zoey's whole world is turned upside down. The electric storm connects her to a ruthless fae, a Wanderer named Ryker, whose dealings expose them to even more trouble and danger. They embark on a journey, running and hiding from both the government and fae, both of which threaten their lives and those they love.

Normally my reviews are longer (yes longer than this one lol) because I over think. However, the less I say the more intrigued you will be. The series has ended and I am parts excited by how perfectly written the story played out and sad because these are characters I've grown to love.

When an author can depict an emotion with words that make you feel all of what is being said, then they've not only done their job, but did it well. This is how I feel about SMB's From Burning Ashes. None of the characters had it easy. From the beginning it has been a race to survive. And while reading, all I could say was "can they catch a break?" lol.

FBA is everything I'd hoped it would be and some. It was heart pounding, heartfelt and an adrenaline rush as Zoey, Ryker and Sprig fought to the death against their pursuants.

Stacey once again proves herself in the finale of an amazing series. She had me worried for a moment, but she never seems to disappoint her readers. Even though her cliffhangers have cliffhangers. FBA has become another favorite to be cherished and housed in my heart for life!

You have subscribed to alerts for Stacey Marie Brown.

You have been added to Stacey Marie Brown's favorite list.

You can also sign-up to receive email notifications whenever Stacey Marie Brown releases a new book.