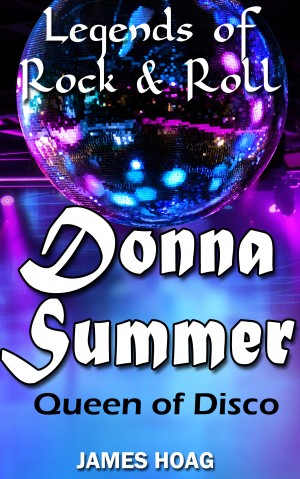 Her life was not without its trials, but Donna was at the top of her game in the Seventies and the Eighties. When disco fell out of favor, she switched to a more rock and roll format and just kept going.

Winner of Grammys and American Music Awards, she hit the Top 40 twenty times. She had several number one hits, like the iconic "MacArthur Park," "Bad Girls," and "Hot Stuff."

All the Legends of Rock & Roll books are essentially biographies, but I am interested primarily in the music. You'll find that the emphasis is on the music, how it came to be, who wrote it and performed it and any juicy tidbits about any given song or album.

If you're a fan of Donna Summer or of disco or enjoy the music of the Seventies and Eighties, scroll up and buy now. You will enjoy it.

James Hoag has always been a big fan of Rock & Roll. Most people graduate from high school and then proceed to "grow up" and go on to more adult types of music. James got stuck at about age 18 and has been an avid fan of popular music ever since. His favorite music is from the Fifties, the origin of Rock & Roll and which was the era in which James grew up. But he likes almost all types of popular music including country music.

After working his entire life as a computer programmer, he is now retired and he decided to share his love of the music and of the performers by writing books that discuss the life and music of the various people who have meant so much to him over the years.

He calls each book a "love letter" to the stars that have enriched our lives so much. These people are truly Legends.

You have subscribed to alerts for James Hoag.

You have been added to James Hoag's favorite list.

You can also sign-up to receive email notifications whenever James Hoag releases a new book.