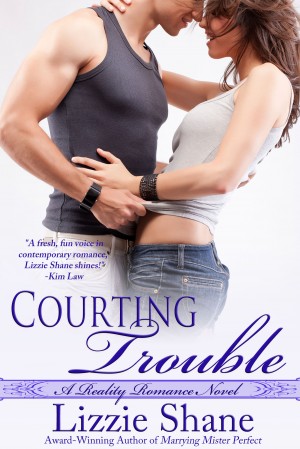 Elena has always been impulsive, until one wild night on a reality dating show earns her a reputation she can’t escape. She wanted to be famous, but now she’s infamous and determined to redeem herself. No more impulsive Old Elena. New Elena is going to be respectable and sweet if it kills her—and her first task is attending the wedding of the woman who beat her on the show.

Secret Service golden boy Adam Dylan never wanted fame, but when he’s caught on camera saving the daughter of an A-List actress the video goes viral and he becomes America’s favorite hero. But there’s more to the story than the media hype. Now a sought-after celebrity bodyguard, he’s determined to earn his heroic reputation—even if that means nothing more glamorous than working security at a celebrity wedding.

When one of the wedding guests doesn’t want to take no for an answer, Adam comes to Elena’s rescue. It’s been a long time since anyone has stood up for her, but her reputation can only drag him down. Elena knows she should keep her distance, but it’s oh so tempting to give in to her wild impulses just one more time.

Lizzie Shane is a romance nerd and an avid fan of the sociology experiment that is reality television. In 2015, she launched the Reality Romance series with MARRYING MISTER PERFECT, featuring love behind the scenes on a reality dating show. Since then she has followed up that series with the related Bouquet Catchers novels, hitting the Amazon bestseller list and garnering numerous award nominations. She is a 3-Time finalist for Romance Writers of America's prestigious RITA® Award for contemporary romance and winner of the 2009 Golden Heart® award as well as the 2018 HOLT Medallion.

Lizzie lives in Alaska where she uses the long winter nights to craft more happily ever afters and also writes paranormal romance under the pen name Vivi Andrews. For more about Lizzie, like her on Facebook (www.facebook.com/LizzieShaneAuthor) or visit her website at www.lizzieshane.com. Happy reading!

About the Series: Reality Romance

Contemporary romance novels behind the scenes of a reality television dating show.

You have subscribed to alerts for Lizzie Shane.

You have been added to Lizzie Shane's favorite list.

You can also sign-up to receive email notifications whenever Lizzie Shane releases a new book.