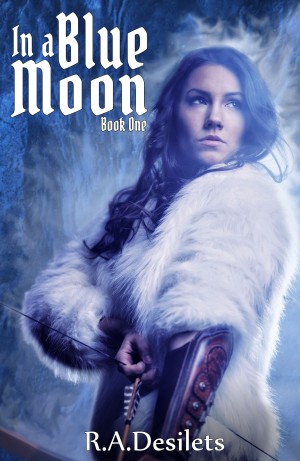 In a Blue Moon

They know Effy’s the key to unraveling the curse, but everyone who remembers how to break the curse is… well, cursed. The murderous mob has Effy in their crosshairs. With Snow, Red, Rapunzel, Gretel, and Pinocchio on the group’s trail, Effy isn’t sure any of them will make it out alive.

Rachel A. Desilets was raised in a small New Hampshire town, but left it behind to attend Emerson College in Boston. After graduating with a degree in Writing, Literature, and Publishing, she moved to southern California.

Working as a barista, she somehow turned her life into a cliché and met her husband while serving him coffee. They fell in love, got married, adopted a bunch of cats, and moved to the rainy side of Oregon.

When she's not writing, she plays video games, drinks tea, reads way too much (though, she wonders if there is such a thing as too much reading), and snowboards.

You have subscribed to alerts for R. A. Desilets.

You have been added to R. A. Desilets's favorite list.

You can also sign-up to receive email notifications whenever R. A. Desilets releases a new book.