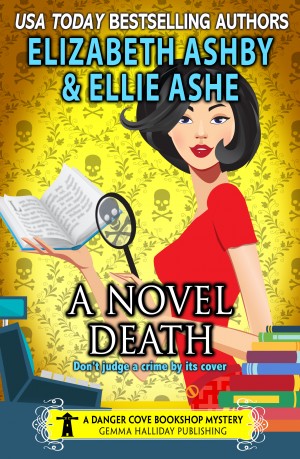 By Elizabeth Ashby
& Ellie Ashe
Rated 5.00/5 based on 1 reviews
Meri Sinclair , new owner of Danger Cove's Dangerous Reads bookshop, lands a killer guest speaker when B-list actor Cal Montague comes to town with his tell-all memoir. Only someone doesn't want Cal telling his tales, and Cal ends up dead outside Meri's shop. With the help of a hot vet and her eclectic bookshop staff, Meri must clear her name...before the killer comes back for a sequel! More
From USA Today bestselling authors Ellie Ashe and Elizabeth Ashby...

When Meri Sinclair inherited Dangerous Reads, she didn’t just get a bookshop. She inherited a legacy. It’s Danger Cove’s only bookstore, and her grandmother had made sure that it's a warm and friendly places for readers of all ages.

Determined to get off on the right foot, Meri has organized a series of author readings, starting off with Cal Montague, a Danger Cove native who grew up to become a solid B-list actor, and his tell-all his memoirs, Tales I Shouldn’t Tell. Only the actor turns out to be a difficult diva, and before the inaugural event can even start, Meri finds the guest of honor in the alley—shot dead. Turns out someone else thought Cal shouldn't be telling tales, too.

With motive and opportunity, the police have Meri in their sights. To save her business and her own skin, Meri turns to her small staff of part-time employees for help. Along with some assistance from Danger Cove’s hot new veterinarian, Meri, sets out to help the Danger Cove police—whether they appreciate it or not—before the murderer returns for a sequel.

About Danger Cove:
Danger Cove is a sleepy little town in the Pacific Northwest and home to renowned mystery novelist, Elizabeth Ashby. While Elizabeth swears the stories she writes are fiction, you can find the inspiration for her murderous tales all over Danger Cove...from the intriguing cast of local characters to the places to eat, play, and explore in Danger Cove. Don't let our name fool you—we're the friendliest (even if deadliest) town in the Pacific Northwest! Visit us online!

Elizabeth Ashby was born and raised in Danger Cove and now uses her literary talent to tell stories about the town she knows and loves. Ms. Ashby has penned several Danger Cove Mysteries, which are published by Gemma Halliday Publishing. While she does admit to taking some poetic license in her storytelling, she loves to incorporate the real people and places of her hometown into her stories. She says anyone who visits Danger Cove is fair game for her poisoned pen, so tourists beware! When she's not writing, Ms. Ashby enjoys gardening, taking long walks along the Pacific coastline, and curling up with a hot cup of tea, her cat, Sherlock, and a thrilling novel.

About the Series: Danger Cove Mysteries

Welcome to the town of Danger Cove, a sleepy little town in the Pacific Northwest and home to renowned mystery novelist, Elizabeth Ashby. While Elizabeth swears the stories she writes are fiction, you can find the inspiration for her murderous tales all over Danger Cove...from the intriguing cast of local characters to the deliciously dangerous places to eat, play, and explore in Danger Cove. Don't let our name fool you—we're the friendliest (even if deadliest) town in the Pacific Northwest!

Another great Danger Cove cozy mystery sponsored by Gemma Halliday!
See publisher's blurb for basic clues. There is lots of suspense and mystery regarding the murder and the irascible police detective who treats Meri like a prime suspect just because the victim was shot at her bookstore. Lots of plot twists and changing suspects and clues keep your nose stuck in this book (and the series) until dinner is late or whatever. The characters really are, and yet they are so real that you just might know them! Then there is the dog stuck up a tree and the curried Lutefisk!
The Danger Cove books are all stand alone, with the town itself being the only constant.
Ellie also writes the Miranda Vaughn series, and they are spectacular, too!

You have subscribed to alerts for Elizabeth Ashby.

You have been added to Elizabeth Ashby's favorite list.

You can also sign-up to receive email notifications whenever Elizabeth Ashby releases a new book.