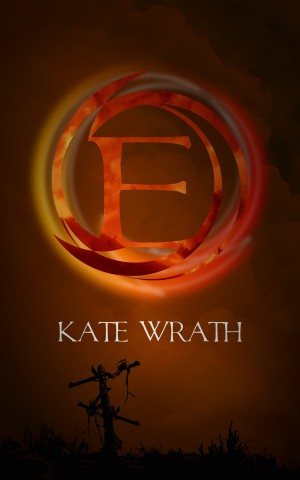 By Kate Wrath
Rated 4.00/5 based on 2 reviews
Dropped onto the streets with nothing and no one, Eden struggles to avoid death, slavery, and the attentions of the sexy-but-evil overlord of the Outpost. A dark, gritty, poetic tale of survival and friendship in a desperate world. More
BOOK ONE IN THE E SERIES

Life is harsh. It makes no exceptions. Not even for the innocent.

Outpost Three: a huddle of crumbling buildings choked by a concrete wall. Cracked pavement, rusted metal, splintering boards. Huge robotic Sentries police the streets, but the Ten Laws are broken every time one turns its back.

Eden is determined, smart, and a born survivor. Stripped of her memories and dumped on the streets of the Outpost, slavers and starvation are only the beginning of her problems. A devastating conflict is coming that threatens to consume her world and tear her newfound family apart.

“Absolutely heart-stopping! Grizzly, dark, haunting and gripping in a way that kept me glued in to the very end. If you are looking for a strong and smart heroine in a kick butt dystopian world, this is the book for you.” - Leti Del Mar, author
Download: epub mobi (Kindle) pdf more Online Reader
lrf pdb txt
Price: Free! USD
Add to Library
Create Widget
Tags: romance adventure earth future robots series poetic ya gritty dystopian
About Kate Wrath

Kate Wrath is the author of the E series and the Fairytale Evolution series. She resides in the high mountain deserts of the southwestern US. Kate believes in literature as an art form, world peace, and animal rights, but aspires to write total trash that is full of senseless violence, with characters who eat house pets.

* Eden and Jason and Lily are companion books that are meant to be read closely together.

About the Series: The E Series

In a dystopian world where the masses struggle to fulfill the most basic of needs, where robots inflict immediate 'justice' upon those who break the rules and yet warlords and criminals thrive, a girl is dropped onto the streets of a distant Outpost without her memory.

The E Series follows Eden's journey from nameless girl to powerful figurehead, navigating a labyrinth of events that become the foundation of a revolution.

An epic story, and a human one. Friendship, love, and family are all put to the test in this darkest and bleakest of landscapes.

Also in Series: The E Series

Reviews of E by Kate Wrath

This book is well written, well proofread, well plotted but so miserably dark and depressing that I just can't give it the rating it deserves. I do not think the dystopia is very believable because there is so much unexplained. Where does the food come from? Why can't they grow some? Why is the countryside off limits? Who's making all the trash they live in? What's happening in the remainder of the world? The entire world of the story does not seem to be as big as a single township. Maybe some of these things are explained in later books of the series. Not only is the environment so mean, but the people are too. They can't show affection, can't be nice, and that's with their friends and family. There is no real explanation for the side taken by the second and third characters in the story.

The plot is a pretty girl who's mind has been erased waking up in a metal coffin in an environment that reminds me of the Mexico City dump but is called an 'outpost'. It is ruled by a warlord and during the story it is attacked by another warlord from a different outpost. There are big robot policemen around, but they are quite stupid and do more harm than good.

The story is more character driven than plot driven however. There is a lot of time spent with the main character's thoughts, which are actually pretty realistic for someone her age (18). Her biggest concern was for a young boy which seemed a little more intense than normal, almost to the point of obsession. If he was her own child, I could see it.

While I don't understand why someone would write something so depressing, I do understand why people read it. Our society seems to have a deathwish. It seems like we are all convinced the future is this bleak and there is nothing we can do about it, but there is. All we need to do is raise the top income tax bracket back to 91% as it was when the country was 'great' so we can rebuild our infrastructure. We need to inhibit the free flow of capital so our corporations can no longer export our jobs to countries where workers are the most exploited. We need to regulate the internet so it doesn't spread lies as fact, convince white males to get over their relative loss of status and begin to prepare for the billion climate refugees who will be migrating toward the poles this century. It is the division between rich and poor, not right and left or black and white that is ruining our way of life.

I was pulled into this story and couldn't stop. It is dystopia that is believable and eccentric. Total must read. I miss the characters.

You have subscribed to Smashwords Alerts new release notifications for Kate Wrath.

You have been added to Kate Wrath's favorite list.

You can also sign-up to receive email notifications whenever Kate Wrath releases a new book.