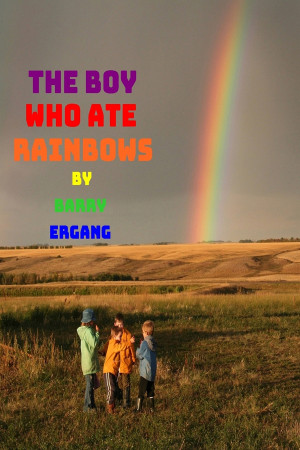 The Boy Who Ate Rainbows

By Barry Ergang
Rated 5.00/5 based on 2 reviews
When Christina and her friends investigate the mysterious disappearance of a rainbow, they meet an unfriendly boy with a strange power in this children's fantasy story. More
The rainbow doesn't fade as rainbows normally do. This one mysteriously sinks away while Christina, Gordy, Sandy and Brian watch in amazed disbelief. When they decide to investigate the mystery, they meet Duncan, an unfriendly boy with a strange ability. Why does he do what he does--and how does he do it? Should they befriend him or beware? Find out in this fantasy story for young readers.

Christina and her friends like it when there is a summer shower followed by a rainbow. It is one of the things they love about summer. That was until one day when the rainbow slowly began to disappear as it vanished into the ground. The entire rainbow just kept going over until the other end of the rainbow disappeared.

Nobody has ever seen anything like it. None of the kids has any idea why it happened. Nor did the any of their adult family members. It would be awhile before they could talk to their teachers at school about it as that wouldn’t start until September.

The kids decided that when the next shower happened and the rainbow formed they would ride their bikes to where the rainbow was to find out what was going on. When that happened the kids jumped on their bikes. They rode and rode and eventually had to walk into some woods. The last bit of the rainbow led them to a clearing where they found The Boy Who Ate Rainbows.

They also learned his name is Duncan and a lot more in this cool tale for kids written by Barry Ergang. Originally written as a fourth birthday gift for the daughter of close friends, the read is a cool mystery fantasy that has a number of important teaching moments for children. Not only was the book a hit with a birthday girl, the read was a big hit with her fellow Montessori classmates. That led to four pictures by those students being included in this edition.

A short tale of understanding, compassion, and hope for the future, The Boy Who Ate Rainbows is a fun read for both kids and adults. While the original tale and artwork may be nearly 20 years old, the message contained in these 18 pages is universal and timeless.


Barry Ergang provided me a PDF copy back in May with absolutely no expectations that I would review it.

This is a wonderful short story with an important message for young children. It's short, to the point and delivers a message in simple terms. As a mother, a grandmother and a teacher, I highly recommend this book for young children. The main idea of the story is for children to realize that we all need friends and we all have feelings. I read this to my six year old granddaughter and she completely understood how important it is to be kind to classmates and others. She said she was glad it was a happy ending and that all the kids became good friends. As a teacher, I have to say this is a great way to foster good feelings in school. Perhaps if more people took the time to read books such as this to their kids or their classes, there would be less bullying in schools. As we all know, bullying starts early...so, we, as parents and educators, have to get out in front of the kids and find ways to prevent it. This book is a great start in that direction. It was a great find. Not only does my family now have the book, but I've added a copy to my classroom library. I just have to say, "Job well done!"