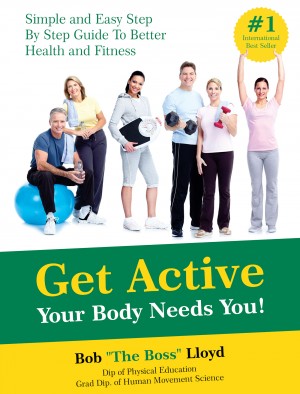 Get Active Your Body Needs You!: Simple and Easy Step By Step Guide to Better Health and Fitness

What are we doing to our bodies?

What do we want from life?

How long do we want to live?

Is our lifestyle killing us?

Why are we eating this type of food?

I could go on with any number of questions. It is becoming clear that the vast majority of the community is not in charge of their destiny. In regards to health, people are allowing their bad habits to drag them down. Once on this downhill slide, they often see no other direction, and so, they simply sit back, accept the direction in which they're heading, whilst vainly clinging to optimistic hope/: “It won’t happen to me”. It should be remembered that our health doesn't exist inside a vacuum. Instead, our health does affect others around us, including family, friends, fellow workers, and in fact, all tax payers. We all have to accept the responsibility of maintaining a satisfactory level of fitness, and hopefully, lead by example.
Available ebook formats: epub
Price: $4.99 USD
Buy Add to Library Give as a Gift
How gifting works
Create Widget
Tags: healthy eating get fit fitness ideas get active get active your body needs you
About Bob Lloyd

Robert John Lloyd was born in 1947 at St George Hospital in Kogarah. Growing up, his interests included Rugby League, Cricket, Tennis, Gold and Surf Board Riding.

In 1967, Robert graduated as a Physical Education ("PE") Teacher from Sydney's Teacher College.

Some of his major achievements included:

He has 2 children and has lived and worked on the Central Coast since 1973 and currently the General Manager at the Star of Sea Luxury Apartments in Terrigal since 2004.

Life is a journey... not a destination...enjoy the ride!!!

Reviews of Get Active Your Body Needs You!: Simple and Easy Step By Step Guide to Better Health and Fitness by Bob Lloyd

You have subscribed to alerts for Bob Lloyd.

You have been added to Bob Lloyd's favorite list.

You can also sign-up to receive email notifications whenever Bob Lloyd releases a new book.