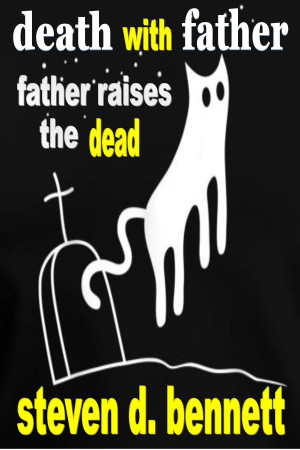 By Steven D. Bennett
Father's only rule for pets--one my sister Alison broke with consistency--was that they were to be kept outside. Father had many peculiarities, which kept life in the Night household unpredictable and exciting. But one Halloween he did something we would never forget: he brought the beloved cat we had just buried back from the dead!

I was born in Boston and grew up in Connecticut and San Diego, which gave me a good background in both history and tanning. I have four children and six grand-children, remarkable in that I am only 35. The fact that I have been married for almost 36 years is the result of an in-utero wedding and honeymoon.

I have published many short stories, poems, songs, and recently wrote and directed a musical melodrama that was performed in the San Diego area. With six books under my belt (THE PATH OF DAYS, TRACE THE DEAD EYE, HUMOR OF THE GOSPELS, HUMOR OF THE GOSPELS Daily Study, THRONE and THE CHUCK-IT LIST) I am looking for a bigger belt to stuff the seventh, which hopefully will be completed in time for the Christmas season. It is about a writer who finds to his horror that a mistake he made on page 47 completely invalidates the plot, forcing him to thus track down and kill anyone who has bought the book lest they spread the truth about his miniscule talent. It is titled DON'T READ THIS! and looks to be a best-seller, unless people take the title literally. Fortunately, nothing I write can be taken literally. It is also fortunate I did not stay with the working title: DON'T BUY THIS! Personally, I don't buy a word of it.

I also have a blog, I Wandered Off the Tour: A Journey In Self-Publishing, which contains my thoughts and experiences through the tormenting process of creation.

Other than writing, I like listening to the same dozen albums and re-runs of the same dozen TV shows I've heard and seen hundreds of times, to the endless delight of my wife.

You have subscribed to alerts for Steven D. Bennett.

You have been added to Steven D. Bennett's favorite list.

You can also sign-up to receive email notifications whenever Steven D. Bennett releases a new book.