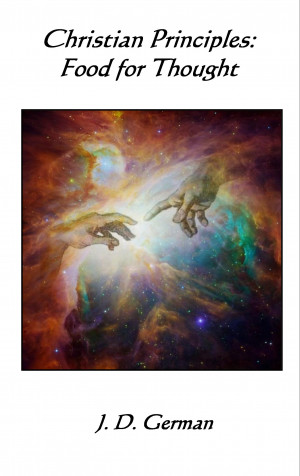 By J. D. German
This is a collection of more than fifty devotional talks given to a men's prayer group over the past five years that focuses on understanding and applying God's word in our daily lives. More
This book is a collection of fifty-four talks given as devotionals to a group of men meeting once a week for a prayer breakfast. These are thoughts and ideas that have come to me – from God, I believe – to help us understand His word and what it means in our daily lives. Most are about things we have heard before, so I make no claim of originality in what I have written. What is different is how I cover the topic from a perspective that may be new to you.
Few, if any, of these writings are superficial; there is a depth of meaning that you will miss if you just skim over the words and go on to the next one. Take time to think about them and see how they might apply to you and your life. My goal in delivering these devotionals to the men’s group, and in publishing this collection, is to help you grow as a Christian, just as I did when I originally wrestled with these concepts myself.
Download: epub mobi (Kindle) pdf more Online Reader
txt
Price: Free! USD
Add to Library
Create Widget
Tags: god christian life philosophy
About J. D. German

J. D. German retired from a 40 year career as a scientist to a lake in southwestern Georgia. His career focused on the development of laser and optical devices for the Department of Defense and other Government agencies. He has also created several patented products for non-military use. Some of these devices show up as the “gadgets” that appear in the his Novels.
Although he is now a part-time technical consultant, he needed he something else to keep his A.D.D mind running at full speed. So in 2015 he wrote his first novel, "The Hermetrius Conspiracy" and published it on the Smashwords website as a digital E-book. Since then he has published four other exciting novels that are seen below. He has also published two non-fiction books titled "Christian Principles - Food for Thought" and "Random Thoughts of an A.D.D. Mind." These all are available from www.smashwords.com at no charge.
Mr. German can be contacted at the email address, JDGerman.Author@AOL.com.

You have subscribed to alerts for J. D. German.

You have been added to J. D. German's favorite list.

You can also sign-up to receive email notifications whenever J. D. German releases a new book.