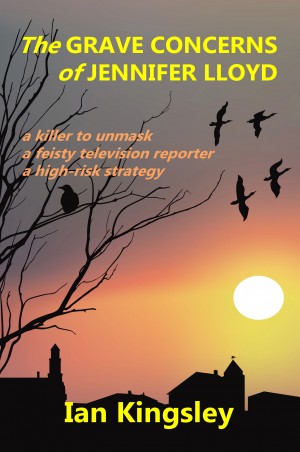 The Grave Concerns of Jennifer Lloyd

Jen is an emotionally scarred 25 year-old hiding vulnerabilities resulting from being sexually abused in a children's home. It left her with a general distrust of men - although cameraman, Josh, lives and hopes to change all that. But her job is based on a false claim to have a degree in ecology, and she dreads this being discovered. Fame seems the only way to underpin her new career, so she is willing to take risks. She shares with the reader her worries and fears, her thinking about the certainty of two murders, the humorous elements of her job, and the anger she feels against her abuser - and a father who abandoned her as a child of three after her mother's tragic accident.

Death threats are just one of her problems during Jen's investigation into Digby. Now she understands why the police gave up and finally accepted his wife's death was accidental. Nothing is plain – apart from the fact there must be a killer in the house. But was there was one death or two? One murderer or two? And will Jen's newly acquired self-defence skills be enough when the knives come out?

"A fine melding of mystery thriller and contemporary fiction, but refreshingly free of the clichés of either, ‘The Grave Concerns of Jennifer Lloyd’ is… an impressive accomplishment.

"Kingsley has an exceptional eye for detail... and his acerbic pen maintains a prevailing sense of authenticity without the need for grandstanding or false climaxes. Jennifer Lloyd is the catalyst that makes this work. Methodical and confident as she follows her investigation, there’s a certain naivety to her character that Kingsley teases out. It’s an inspired touch which allows for a timely infusion of humour, but more importantly it encourages our concern for her wellbeing as she pursues her pathway to fame. This is further accentuated by Kingsley’s first person narrative and paves the way for a cracking denouement. Recommended without reservation."
–Book Viral

"Murder mystery and thriller readers will relish this. The feisty and conflicted world of Jen… makes for a powerful, compelling read that's hard to put down."
–Midwest Book Review

"Ian Kingsley has created a charming and real young woman whose ambition and logic usually prevail, but who has genuinely believable faults which could also be her undoing... The action and thrills of this novel come from somewhere authentic, which makes them all the more entertaining."
–Readers' Favorite

“One of the most intriguing mystery novels I have read in a long time. The plot is well conceived with multiple threads to keep the suspense, but it’s the characters that really made this a special read for me.” –Avid Reader (Amazon.com)

“Well written fiction that’s a cut above the rest… Jennifer Lloyd is a nice mix of complex, vulnerable and quirky.”
–Annastew144 (Goodreads)

“A fun book to read… The protagonist is a smart, brave and amusing woman.”
–Turi (Goodreads)

YOU CAN ALSO ORDER THIS NOVEL IN PAPERBACK FROM AMAZON, BARNES & NOBLE, WATERSTONES, AND BOOK STORES.

I wanted to write from a very young age, and fiction was always the aim. But non-fiction came first: articles, and my first technical work, were published before I left school.

I began work in research and development in the field of semiconductor research, where I developed a keen interest in technology. I then became a chartered engineer and designed electronic equipment for the disabled. The next step was to combine my interests by becoming a technical author and then a technical publications manager: a role I had for many years. During this part of my career I published a number of technical books under a different name. After that, I finally got around to publishing fiction.

My debut novel, a psychological thriller called ‘Sandman’, was published in 2010, followed by my non-fiction work ‘Reality Check: Science Meets Religion’, in 2011. The latter stemmed from a desire to ratify apparent differences between science and religion. Then back to contemporary fiction, with 'Flying a Kite' in 2013, using underlying ideas connected with man's desire to know the so-called "meaning of life" - but with a thriller twist! My latest novel, a mystery thriller called 'The Grave Concerns of Jennifer Lloyd', was published in 2016.

My author website, iankingsley.com, contains further information about all these works, together with a collation of book reviews.

Would you like a free eBook or pdf copy of one of my books in return for a 28 day promise to review? If so, check out the following page on my website: http://www.iankingsley.com/books/jennifer-lloyd/review-copy-requests.php

You can contact me via the email address given on my website or join 35,000+ of my followers on Twitter where I tweet daily as @authorkingsley. It would be great to meet you there. (Hint: That's where I sometimes offer Smashwords discount coupons!)

The Grave Concerns of Jennifer Lloyd
Just a little taster!

Reviews of The Grave Concerns of Jennifer Lloyd by Ian Kingsley

As most fiction writers know, characters don't typically spring from an author's pen to page as full-blown concepts: they evolve, like a sculpture from a piece of clay, as the story moves on. This wasn't the case, however, for author Ian Kingsley as he wrote The Grave Concerns of Jennifer Lloyd. His protagonist, Jen, 'built herself' and poured from his pen already developed as a strong and humorous lead character with whom the reader can readily empathize: one filled with zest and always ready to confront new situations. Kingsley's other characters are equally interesting and well-drawn, and the English country estate where the mystery is set sounds gorgeous. There is even a romantic angle.

From its first paragraph, The Grave Concerns draws readers in with a flash and a bang: "I plan to start with a murder. That should get me noticed. I'm after headlines and television news. Or, to put it more bluntly: fame."

Jen's job in freelance television involves creating lead stories, conducting interviews, and cultivating a nose for trouble. It's the latter that drives Jen into a dangerous situation, even though her job largely consists of developing wildlife and documentary pieces and educational works.

All this is about to change as she confronts something far more sinister. Her troubled past comes back to haunt her and she discovers that her talents and instincts may be no match for her adversaries.

As Jen's secrets and lack of credentials are exposed, threatening everything she's built, she finds herself recreating a new life through alternate avenues that bring her into contact with different experiences and individuals.

Can a TV reporter who has invented her career path solve murders that have baffled the police? What happens when she truly has to face down a murderer and confront her own ethics by possibly destroying a man's carefully-built facade of a life that he, too, has reinvented in a creative manner?

Murder mystery and thriller readers will relish The Grave Concerns of Jennifer Lloyd. The feisty and conflicted world of Jen and how she chooses to navigate her obstacles makes for a powerful, compelling read that's hard to put down.

You have subscribed to alerts for Ian Kingsley.

You have been added to Ian Kingsley's favorite list.

You can also sign-up to receive email notifications whenever Ian Kingsley releases a new book.